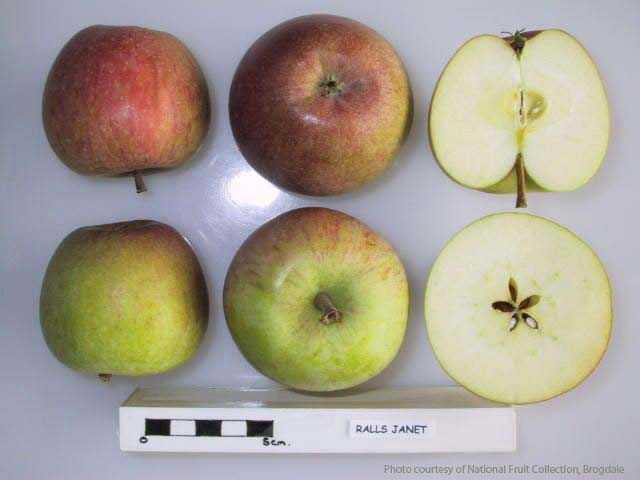 Summary: Known as Kokko in Japan, the Ralls' Genet, an excellent eating and culinary apple in its own right, was used as the nucleus for the Orient's apple breeding programme that has been ongoing for over a century.

Identification: Medium to large, round-conic and quite regular in shape, The skin background colour is green-yellow washed with pink and covered with broken darker red stripes on the sun exposed face. Profusely marked with small, white lenticels. The eye is medium size, partly open and set in a somewhat deep and narrow, lightly puckered basin. The stem is medium length and medium thick, set in a deep and narrow, lightly russetted cavity, occasionally with a fleshy swelling alongside it

Characteristics: The flesh is yellowish, tender, fine-grained, crisp and juicy. Sprightly and well-flavoured.

Uses: This was, until the 1920s, a widely grown and popular American fresh-eating apple. It is still grown, but nowhere near the scale it once was. An excellent additive in making blended ciders.

Origins: First documented as being grown in the orchards of nurseryman Caleb Ralls in Amherst County, Virginia (U.S.A.) during the late 1700s. The rest is, to a large extent speculative and made plausible by the fact that all of the players were essentially neighbours. Story has it that Edmond-Charles Genet, the French emissary to the U.S.A. in 1793/94 gave a few apple cuttings from his native France to Thomas Jefferson, then United States Secretary of State. Jefferson, in turn, supposedly gave the cuttings to Caleb Ralls who was located just across the James River in Amherst County. Ralls promptly grafted them to some of his rootstock and marketed them throughout the region. It was also sold by Burford Brothers and Stark Brothers under the name of Jeneton. With its frost-resistant, late bloom, it was a perfect match for that region and became widely popular until the early 1900s when commercial orchards looked to newer, more productive varieties. It should be considered an apple of French origin until DNA testing can positively confirm or deny its derivation.

Cultivation: Vigorous, spreading tree with a great deal of twig growth which makes pruning a bit of a chore. Also, it needs to be thinned after bloom in order to maintain fruit size and quality. It has a tendency to bear the best harvests every other year.

Progeny: In the late 1930s, Ralls' Genet caught the attention of apple breeders in the Orient who, over the ensuing years, crossed it with several different varieties. Most notable among these was the Fuji . Also included is the Kyokko , Fukunishiki , Shinko , Amanishiki , Horei , Megumi and Fukutami

Notes: Ralls’ Genet was one of 75 apple varieties acquired by Japan in 1871 from the U.S.A. and it soon became the cornerstone of its apple breeding programmes until it was usurped by the Starking Delicious and the Fuji which is in itself a product of that programme.

Cold storage: Keeps up to five months in cold storage.

Vulnerabilities: Susceptible to mildew and blight. Some susceptibility to scab and bitter rot.

Harvest: In the latter half of the fourth period (150 to 160 days after petal fall).