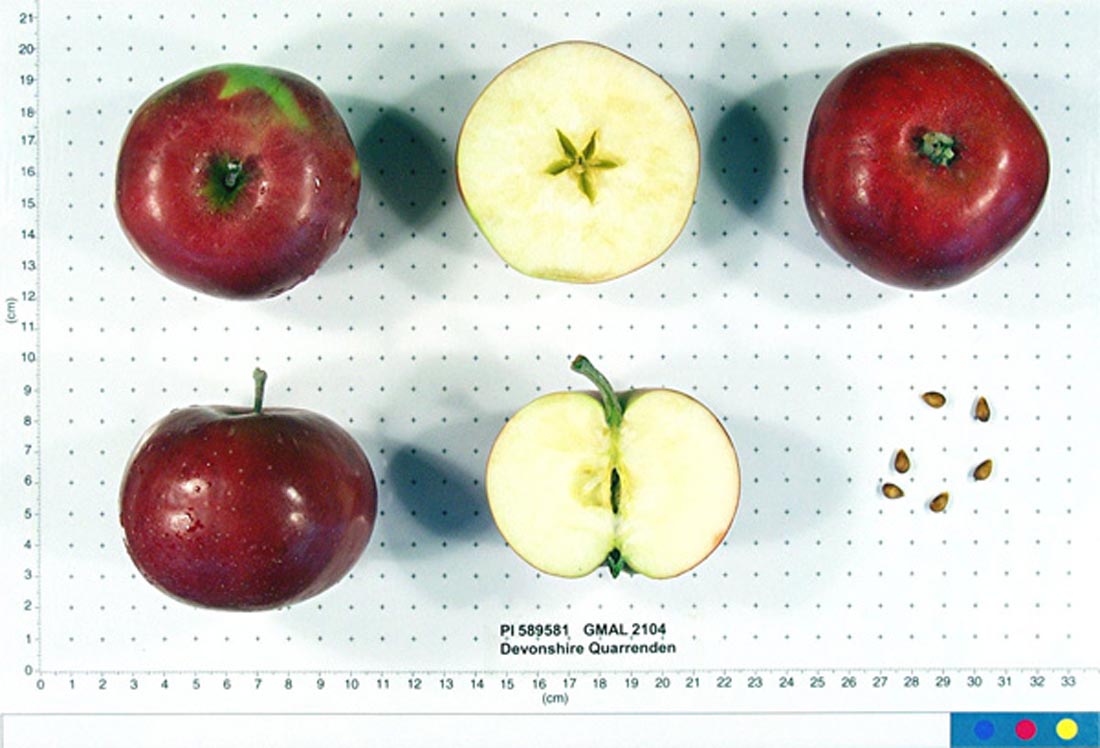 Summary: Blood of the Boyne

Identification: Small to medium size, round to round flattened. The skin is smooth and glossy. The base colour of pale green shows through on the shaded face, the rest of the apple is covered in a purple flush. Sometimes lightly striped. The base colour also shows through where the apple has been shaded by a branch or leaf. The stem is medium and set deep in a deep, funnel-shaped cavity. The calyx is large, partly open and set in a shallow and somewhat wide basin. The skin develops a greasy feel when ripe and in storage.

Characteristics: The flesh is white with a noticeable red stain close to the skin, crisp and juicy. Good sweet-tart balance with distinct strawberry and loganberry flavours.

Uses: This is a early ripening, fresh eating apple which does not last more than a week or two after being picked. Also good for cider and it makes a wonderfully aromatic sweet-tart apple sauce.

Origins: Though it is generally considered a Devonshire (U.K.) apple, it actually originated in the apple-growing area of Carentan in Normandy (France) sometime around the 1660s and its name is an anglization of Carentan. John Worlidge recorded the Quarrenden as being grown in Devon in 1676 in his "Vinetum Britannicum."

Cultivation: A moderately vigorous, upright spreading tree that grows quite large unless grown on dwarfing root stock. Bears fruit on spurs. Tends to produce best crops every other year but this managed by thinning the fruit a month after petal fall. Well suited to espalier training. Tolerates rainy and blustery climate.

Ploidism: Diploid. Partially self fertile, but produces the best harvest when grown in proximity to a source of compatible pollen.

Harvest: Ready for harvest in the latter half of the third period.