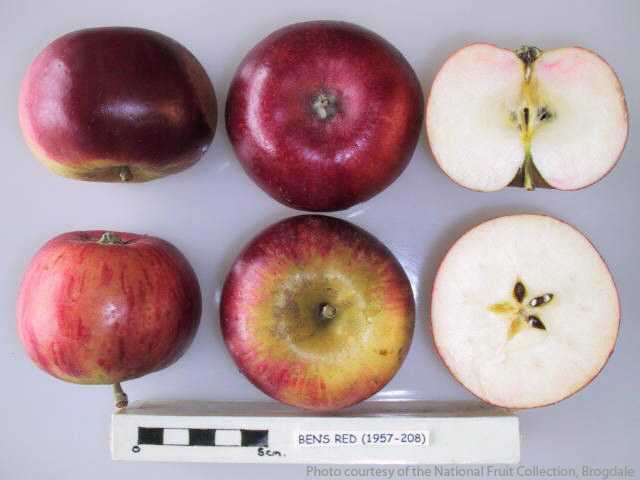 Synonyms: At one time, these were marketed under the name Quarrenden.

Identification: Medium size tending to large, round and round-flattened. The skin is yellowish with a maroon flush over most of the surface and dark red stripes that are difficult to see. Large russet lenticels. The skin is shiny and tends to become greasy with maturity. The calyx is closed, sometimes partly open, set in a wide, shallow basin which is lightly puckered. The stem is short and thick, set in a wide and deep cavity. Considerable variations resulting from soil and weather conditions.

Characteristics: Flesh is light cream with pink tinges. Crisp, firm and coarse-grained. Slightly dry and sweet with a distinct flavour of strawberries and raspberries.

Origins: A seedling of an open pollinated Devonshire Quarrenden ; the pollen parent is thought to be a Farleigh Pippin . Raised by Benjamin Roberts of Trannack, Cornwall (U.K.) during the early 1830s. It was subsequently introduced in the 1890s by G. Bunyard Nurseries in Kent and sold extensively in the U.K. under the name of Quarrenden.

Cultivation: Tends to be a small, spreading, brushy tree with fruit forming on the spurs. Biennial. Does best in temperate, marine climates.

Notes: This is one of the few apple varieties that can be effectively propagated by planting cuttings.

Harvest: Produces heavy crops that ripen in the first half of the fourth period.