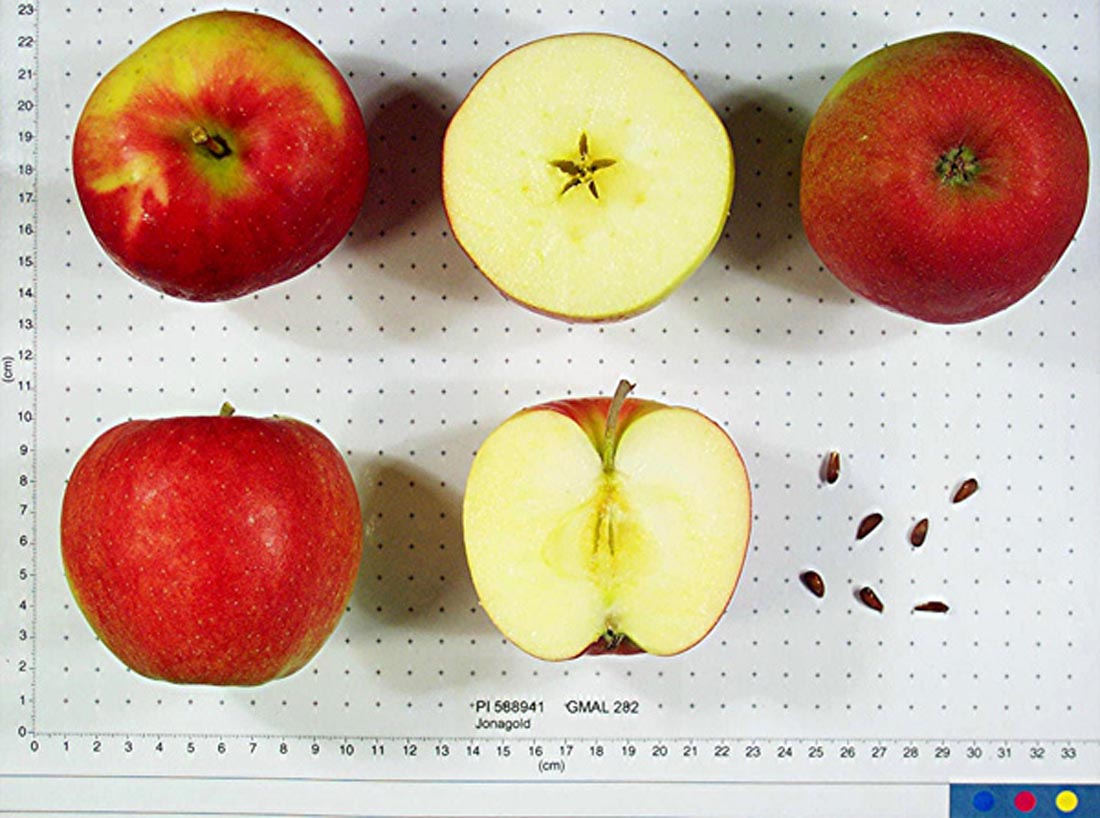 Identification: Medium to large, round-conic, often with a trace of ribbing and a faint five-pointed crown. The thin, tender skin is yellow with large, red blush and faint stripes. Liberally flecked with tan dots, heavily at the blossom end and less so toward the stem end. The stem is long and slender and there is a tendency to form a considerable amount of russet around the stem and even over the shoulder onto the face when grown in humid areas. The stem cavity is deep and wide. Over-ripe Jonagolds have a greasy feel to the skin. Bruises easily.

Characteristics: The flesh is creamy yellow, medium-grained, crisp and crunchy. Juicy with a tart-sweet, honeyed taste. The flesh turns brown as it oxidizes, albeit slowly.

Origins: Developed from a cross between Jonathan and Golden Delicious at the New York State Experimental Station in Geneva, New York (U.S.A.) in 1943. The 52 seedlings from this cross bore their first fruit in 1953 and of these–NY43013-1–was selected for propagation by grafting. It was named Jonagold by James Oakes, one of several apple growers who evaluated the variety. Released in 1968. Commercial orchardists quickly appreciated its value and it became one of the most widely grown varieties in the Western Hemisphere within just two decades. However, North American sales were slow until more highly coloured mutations emerged.

Cultivation: Moderately vigorous, spreading tree with drooping limbs. It bears fruit on spurs as well as short shoots and produces best crops when pruned to encourage the growth of new branches. Very heavy cropper. It has a strong tendency to bear every other year, though this can be controlled with aggressive fruit thinning soon after petal fall. Does best in cooler climates and developed to tolerate hard winters.

Ploidism: Triploid. Produces only sterile pollen. Do not use Golden Delicious as a pollinator since it is incompatible.

Mutations: More than 70 mutations have been recorded.

Vulnerabilities: Very susceptible to scab, moderately to fireblight to mildew. Resistant to rust. Prone to canker. Sun burn is a problem in areas of hot summers.

Harvest: Ripens in the first half of the fifth period (140 to 160 days after petal drop) and should be picked in three sessions, five to seven days between them. The fruit hangs well with no drop before full maturity.

characteristics: The flesh is creamy white, medium firm, crisp and juicy with mild acidity. The tartness mellows in storage. Last up to four months in cool storage or two weeks ...

summary: A mutation of Jonagold .