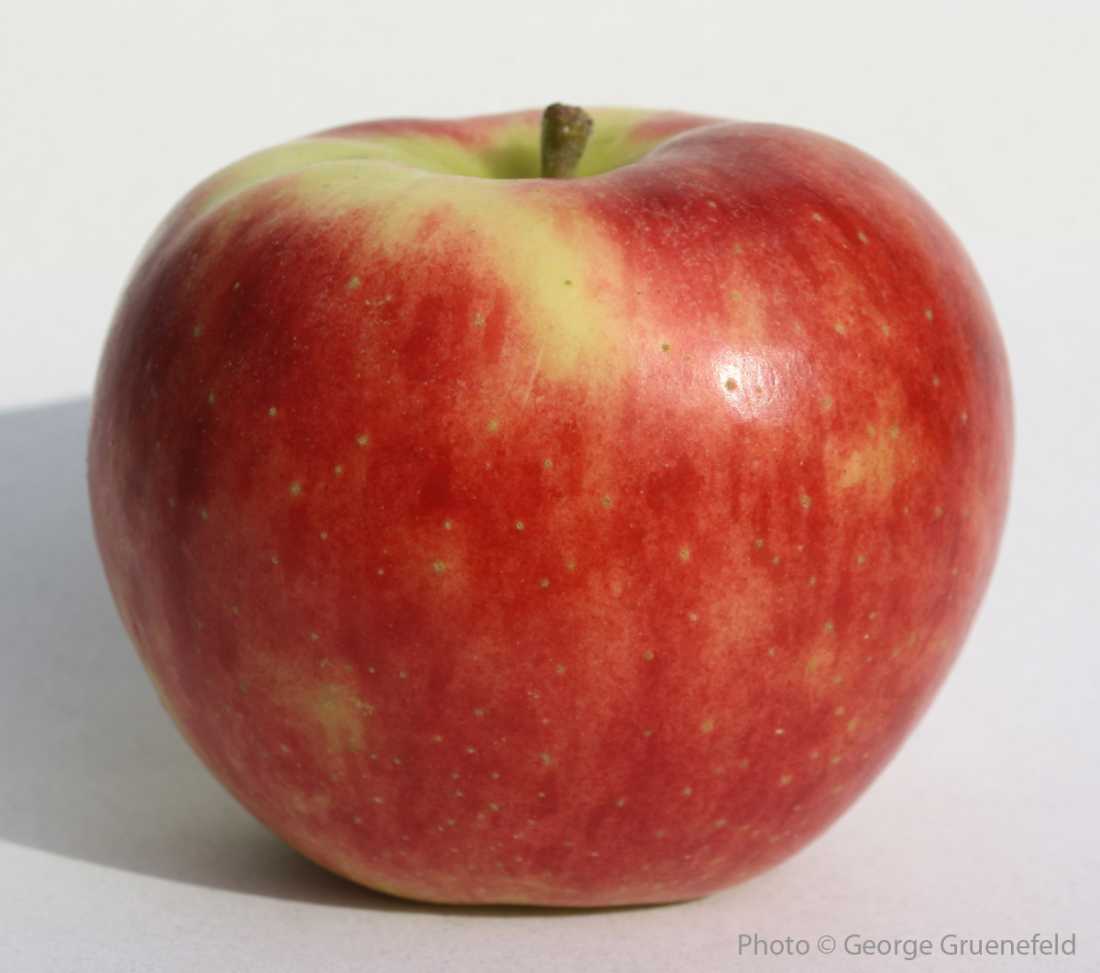 Identification: Medium to large and round-conic. Lightly ribbed. Yellow base colour, over which are red/orange flushes and broken stripes. Some tendency toward thin russet. The lenticels are small, protruding and russet, sparsely scattered over the whole apple, but more abundant toward the eye. The stem is short, stout and set in a somewhat shallow, funnel-shaped, russetted cavity. The calyx is small, closed and set in a deep and narrow basin.

Characteristics: Flesh is creamy white, somewhat crisp and very juicy. Sweet with well balanced acidity, though the tartness almost disappears with a couple of weeks of storage. Fragrant with hints of honey. Brix 12.6

Uses: Developed as a fresh eating apple but it is also a good choice for pies flavour-wise, though the slices tend to become fragile. Makes wonderful apple sauce.

Origins: Developed in 1955 by Dr. Tijs Visser at the Institut für Gärtnerische Pflanzenzüchtung in Wageningen (Netherlands), by crossing Golden Delicious (seed parent) and Ingrid Marie (pollen parent). Seedlings from the cross first bore fruit in 1963 and the cultivar was introduced to the industry in 1972.

Cultivation: Vigorous, upright spreading, spur bearer. Starts to bear fruit at about three or four years, but tends to produce every second year unless thinned aggressively at fruit set. There is no tendency to fruit drop. Summer pruning is essential. Grows best in cool climates but the blossoms are sensitive to frost. Tolerates Hardiness Zones 5 to 8.

Progeny: Santana is a cross of Elstar and Co-op 4 .

Notes: Marketed as Elton in Europe but should not be confused with Elton Beauty which is a British variety.

Cold storage: Keeps two months in a regular cool room, up to six months in controlled atmosphere storage. Flavour matures after about a month in storage.

Vulnerabilities: Susceptible to scab and mildew. Somewhat susceptible to fire blight. The fruit is very prone to phytopthora rot.

Harvest: In the middle of the fifth period. Sometimes picked earlier for a more tart flavour.

characteristics: The flesh is creamy white, with a medium texture, firm and crunchy Aromatic and sweet with just enough acidity to give it a sprightly mouth feel. Keeps up to ...

Synonyms: Civina. Rubens. Not to be confused with the Dutch Rubens which is a Cox's Orange ...

characteristics: Flesh is creamy yellow, firm and somewhat crunchy, tangy and sweet with a hint of lychee and roses, especially under the sun?exposed face.