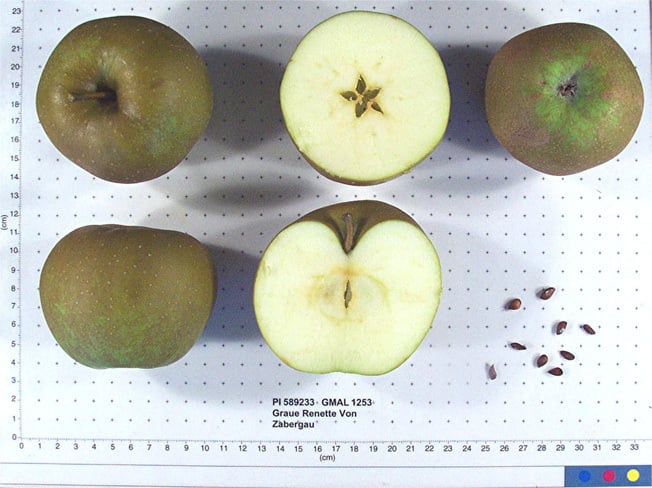 Summary: Intended as a fresh eating apple, but also used for cider. Makes excellent apple pies. Flavour and sweetness improves after a few weeks in storage.

Identification: Large to very large and round, often flattened but sometimes tending to conic. Can be irregular in shape. Skin base colour is yellow at full ripeness, greenish before that. Flushed with bright red marbling on the sun exposed face and covered with a gold-brown russet over 85 per cent of the surface. The calyx is medium size and partly open, set in a deep and narrow basin. The stem is long and slender, set in a deep, narrow basin. Russeting spreads from the stem basin over the shoulders of the fruit.

Origins: Raised from a pippin planted in 1885 near the town of Hausen overlooking the Zaber River in Baden-Württemberg (Germany). Released in 1926. Some sources maintain that it stems from the Graue Französische Renette and is related to the Canada Reinette .

Cultivation: Moderately vigorous upright spreading tree, sometimes with a dome shaped crown. Bears fruit on spurs. Has a tendancy to produce best every other year. Suitable for hardiness zones 4 to 9.

Ploidism: Triploid. Self sterile. Does not produce viable pollen for itself nor other apple trees.

Cold storage: Can be kept for up to four months. Moderately juicy for a month after harvest, then gradually becomes dry and leathery