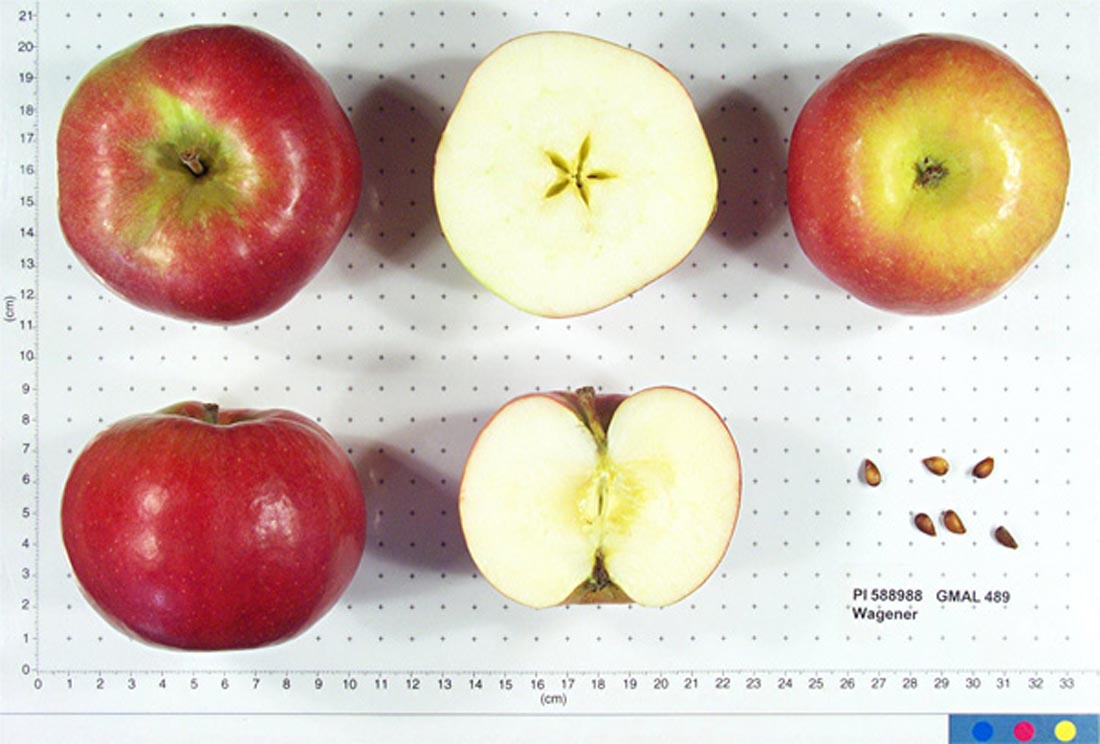 Identification: Medium tending to large in size, round and somewhat flattened, often slightly ribbed at the base. The skin is thin, smooth and shiny. The base colour is yellow over which is a flush of bright red over most of the apple, some lighter splashes and broken stripes. The russetted lenticels are whitish and scattered. Sometimes there are thin lines of russet on the face. A waxy feel and a thin bloom develops on the surface as the apple matures. The calyx is small and partly open, set in a medium deep, somewhat narrow basin. The stem is medium long and slender, set in a deep and funnel-shaped cavity.

Characteristics: The flesh is yellowish, fine-rained and tender. Very juicy, brisk, sweet and aromatic. Tastes best if it has been hit by a frost.

Uses: Intended as a fresh eating apple, but also used for apple sauce. Often used for cider for its tartness and intense flavours.

Origins: The Wagener originated from a quantity of open-pollinated seeds planted by George Wheeler in the Finger Lakes region of New York State (U.S.A.) in the late 1700s. The variety was first documented in the 1847 "Report of the New York State Agricultural Society." The organization had, that year, recognized the Wagener with a second-place order of merit as a seedling of merit. A concise history of the apple is provided by Spencer A. Beach, author of "The Apples of New York" (published in 1903). "...in the spring of 1791 Mr. George Wheeler brought with him from Dover, Duchess county, N.Y. to Penn Yan, Yates county, a quantity of apple seeds which he sowed that spring in the nursery upon his farm which he was then reclaiming from the wilderness. In 1796 Abraham Wagener, from whom the name of the apple is derived, bought this seedling nursery and planted trees from it upon his place in what is now the village of Penn Yan. In 1848 it was remarked that the old tree was producing an annual and abundant yield of beautiful and delicious fruit. It continued to bear full crops till about the year 1865." As is often the case with heritage apples grown from seeds, there seems to be no record of the parentage.

Notes: The Wagener produces three times the Vitamin C of the McIntosh, about 19 milligrams per 100 milligrams.

Cold storage: Keeps for up to four months with no sign of shrivelling.

Vulnerabilities: Resistant to scab and rust, but susceptible to mildew and blight.

Harvest: Over the span of several weeks starting early in the fourth period. Hangs well at maturity. 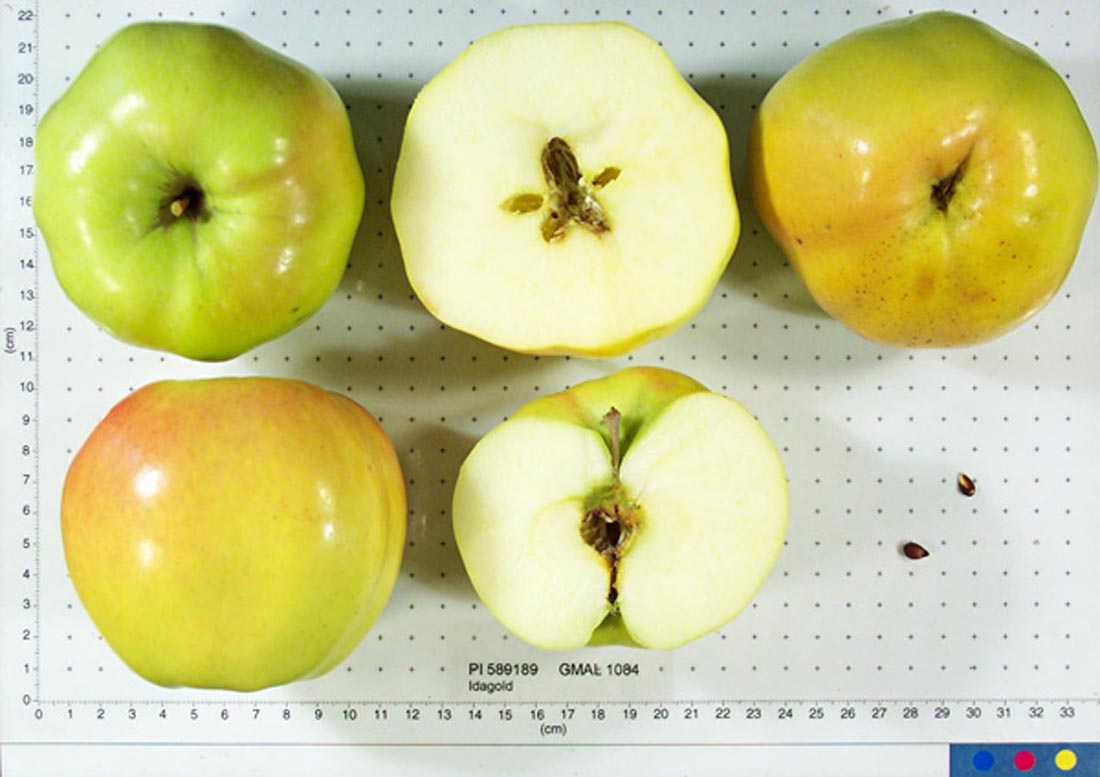 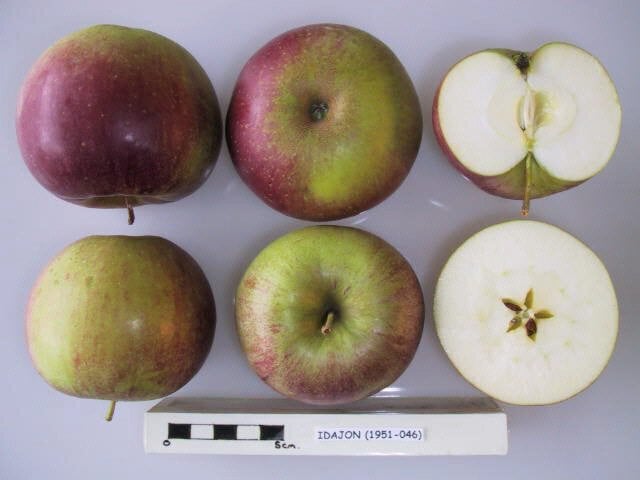 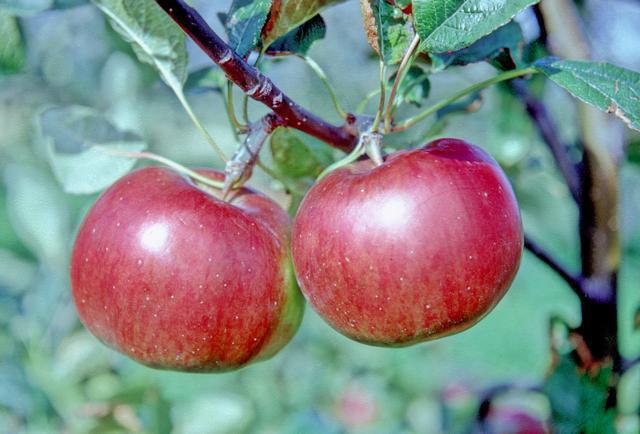 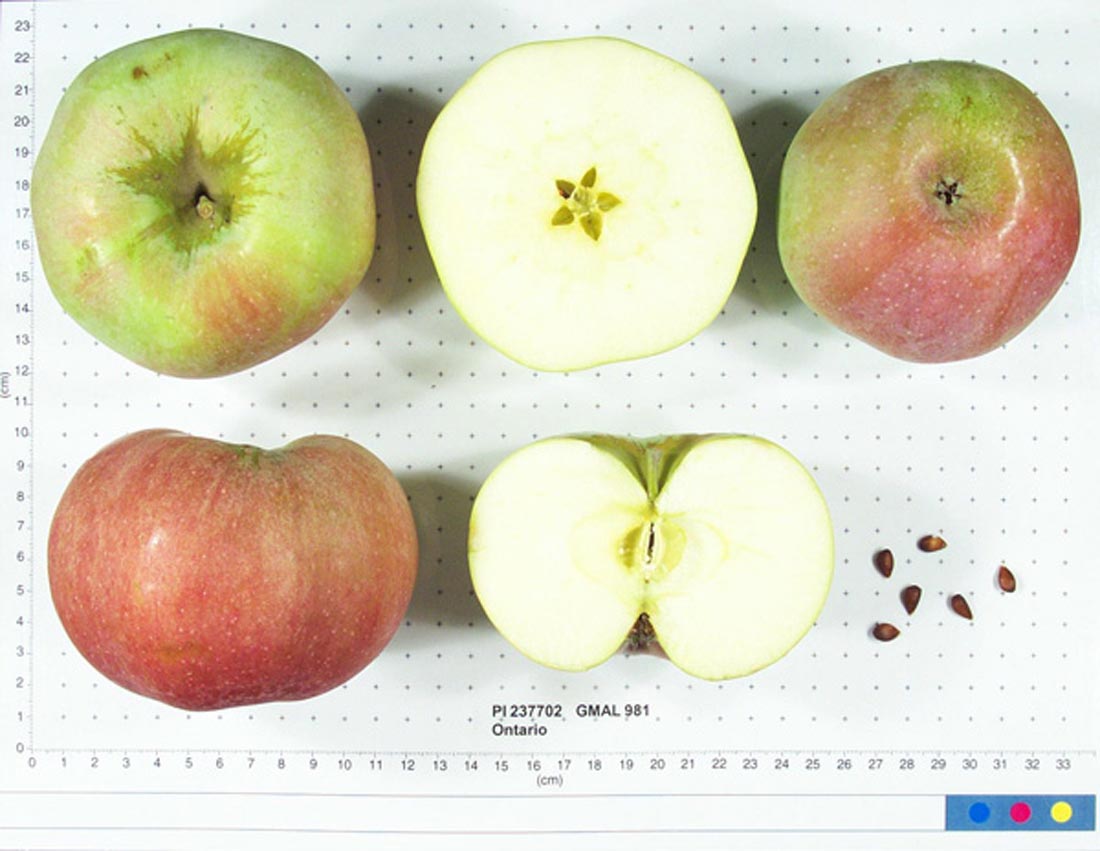 characteristics: The flesh is greenish white, fine-grained, tender and crisp. Juicy, sprightly and aromatic. Needs to be in storage for a few weeks before the flavours and ...

characteristics: The flesh is fine?grained and firm. Moderately sweet and tart.