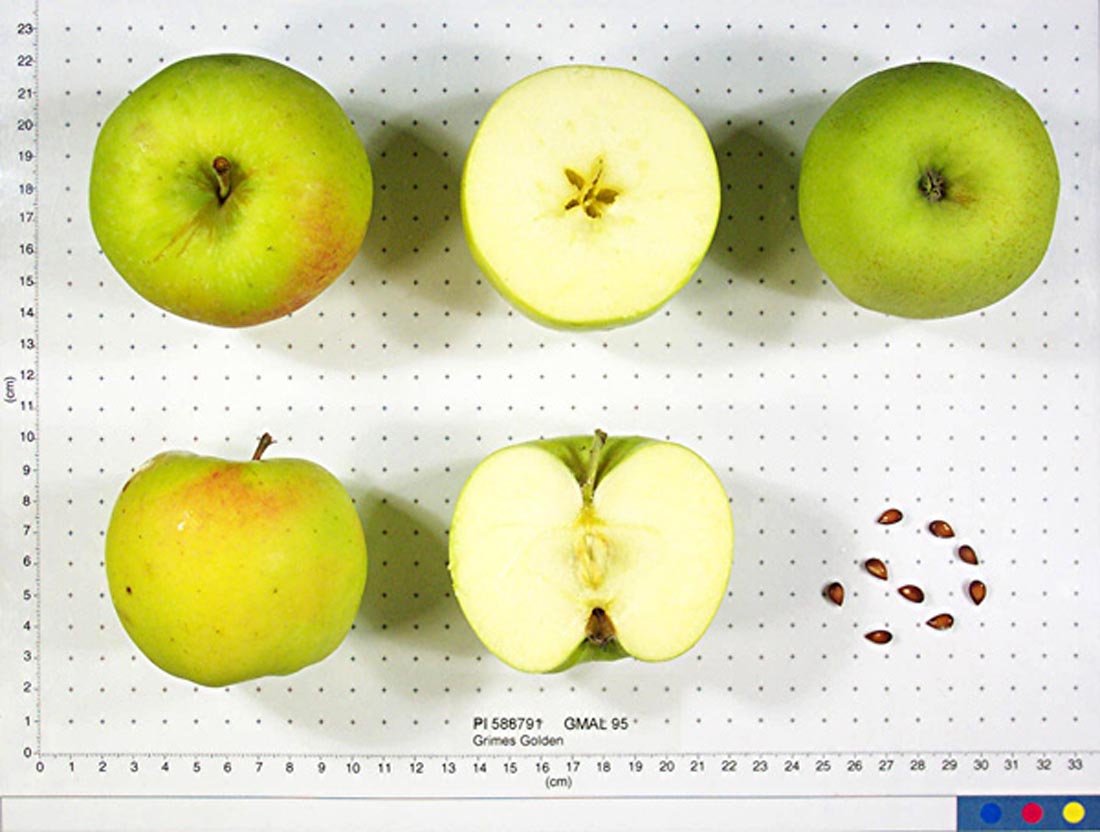 Identification: Medium-plus size, round and tending to be slightly conic with visible ribbing. Tough, greenish-yellow skin, golden-yellow once ripe. A slight tendency to russet, usually in a network pattern. Prominently speckled with small, white dots and some russet lenticels. Stem tends to be medium and slender and set in a deep, open, russet-lined cavity, as is also the case in most of its progeny, including the @2984 which it resembles.

Characteristics: Flesh is juicy, crisp and tender with a distinct tart flavour. Tends to be sweet. Look for a spicy character in the flavour with just a hint of coriander, this is missing in the Golden Delicious. Its high sugar content made it a preferred apple for making hard cider in Virginia’s Blue Ridge Mountains (U.S.A.). Browns slowly when exposed to air.

Uses: It can be eaten fresh, but the tartness is such that it is best used for apple sauce. With an exceptionally high sugar content of 18 degrees Brix, it was the main ingredient for apple jack in the Blue Ridge Mountains of Virginia.

Origins: Found as a wild seedling on the farm of Thomas Grimes Sr. in Brooks County, West Virginia (U.S.A.) and listed by A.J. Downing in the 1857 issue of his "The Fruits and Fruit Trees of America" under Grimes' Golden Pippin. Spencer A. Beach, in "The Apples of New York" (published 1905), suggests that it may have originated during the 1700s stating "Fruit from the original tree was sold to the New Orleans traders as long ago as 1805." Its ancestry is obscure since it likely grew unnoticed from a discarded apple core.

Cultivation: Vigorous, upright spreading tree. Strong tendency to overcrop and must be severely thinned to produce medium to large apples. Early bearer with an inclination to crop biennially unless thinned aggressively every year. The most flavourful Grimes are grown in warmer climates. Tolerates Hardiness Zones 5 to 8.

Ploidism: Self fertile and a good source of pollen for other apples within its group.

Mutations: Though the shape and colour remain characteristic, there are many sports of the the Grimes, some of which are less intensely flavoured than the true Grimes Golden.

Notes: The gavel of the West Virginia Horticultural Society is thought to have been made from the original Golden Grimes tree in 1905.

Cold storage: Keeps up to four months in cold storage.

Harvest: Ready for harvest at the start of the fifth period.