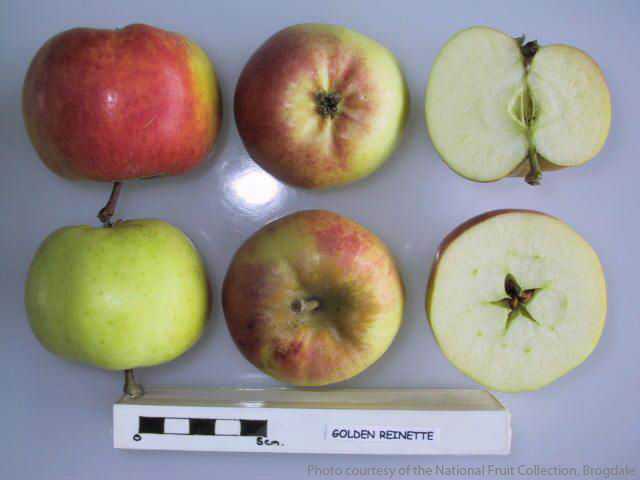 Identification: Medium size, round and flattened, some ribbing may be present but it is often indistinct. The skin base colour is a rich yellow which is blushed red on the sun exposed face with streaks of bright red. Russetted lenticels are abundant on both faces. The stem is short and set in a deep, round cavity which is often russetted.

Characteristics: The flesh is cream-coloured, crisp, sweet and juicy. Somewhat brisk with a fruity flavour and aroma.

Uses: Most commonly used for making cider. By itself, it makes a sweet, slightly tangy and fruity, soft cider. For hard cider, use it for the sweet element for blending with sharp and bitter apples. Also used for baking and it keeps its shape when cooked.

Origins: Believed to have originated in Europe prior to the 1600s. Widely considered a Hertfordshire variety, the Golden Reinette was actually developed on Continental Europe and brought to the U.K.

Cold storage: It keeps well for up to five months in cold storage and continues to improve in flavour.

Harvest: Fruit ripens in during the first half of the fourth period. Little or no fruit drop at maturity.