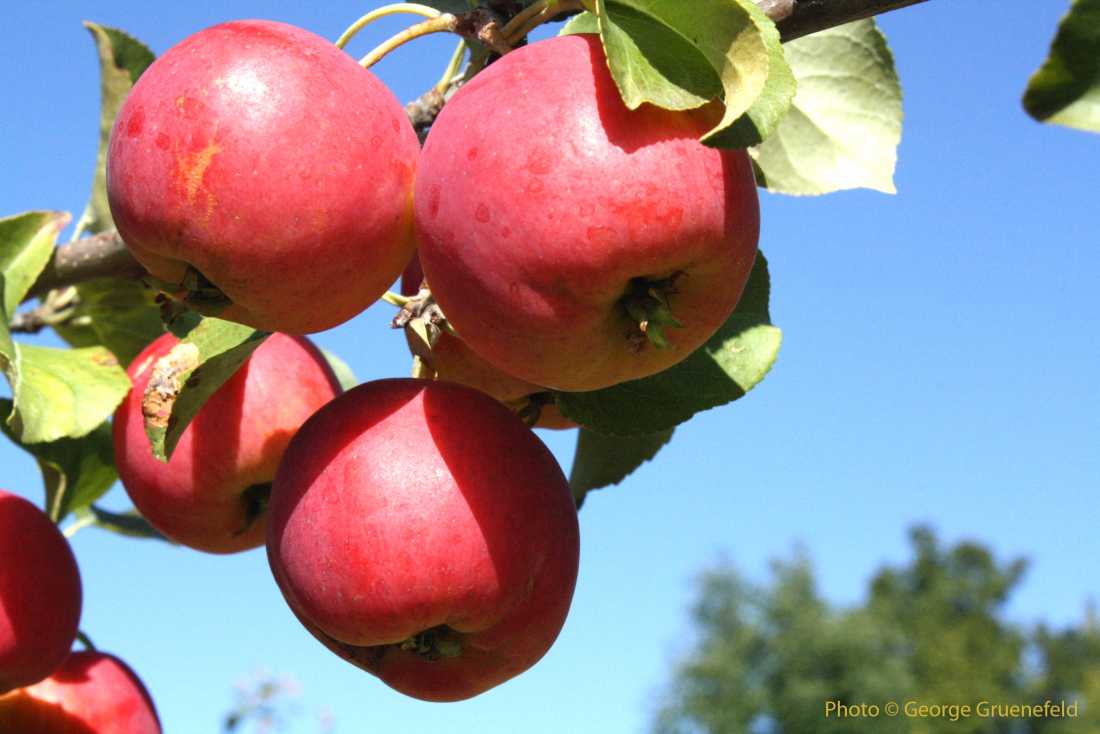 Identification: Small, round with lightly angular sides, often flattened at the eye and stem. When ripe, the base colour is a bright yellow over which is a bright red blush that can range from orange to deep red, sometimes marked with a light network of russeting. The calyx is partly open, with long, pointed sepals, set in a deep and wide basin which is irregularly puckered and surrounded by a knobbed ridge. The stem is long, slender and set in a medium deep and narrow cavity. A thin, tan bloom develops on the surface.

Origins: Received by amateur cider maker Claude Bilodeau of Lotbinière, Quebec (Canada) as a mislabelled apple in the 1970s. Although the real identity of the apple has not been found, the apples produced by the tree proved to be excellent, not only for cider making but also for fresh eating and jelly. In 1986, he gave some scion wood from the tree to his friend Claude Jolicoeur, a craft cider maker from Petite Rivière Saint Francois in Quebec. Jolicoeur introduced the apple as the Bilodeau in his “The New Cider Maker’s Handbook” published by Chelsea Green Publishing, 2013. “I have always thought it is possible this is an already named variety, but I have yet to find an identical fruit,” Jolicoeur explains in his book. “It does have some similarities with the Robin Crab and with the Virginia Crab, but it isn’t identical with either.” To date, that situation has not changed.

Notes: Sometimes considered the same as Hewe's Crab , but there are definable differences. Primarily, the Bilodeau ripens several weeks earlier. In addition, the calyx basin of the Bilodeau has a defined, crowned ridge around it and a pronounced cavity, whereas the Hewe's has little or no basin as is frequently noted among crabapple varieties. Both are bright red, very sweet and highly flavoured.

Vulnerabilities: Generally disease free, but scab has been reported in a few isolated areas.

Harvest: In the first half of the fourth period.

characteristics: The flesh is white and firm. Keeps well.