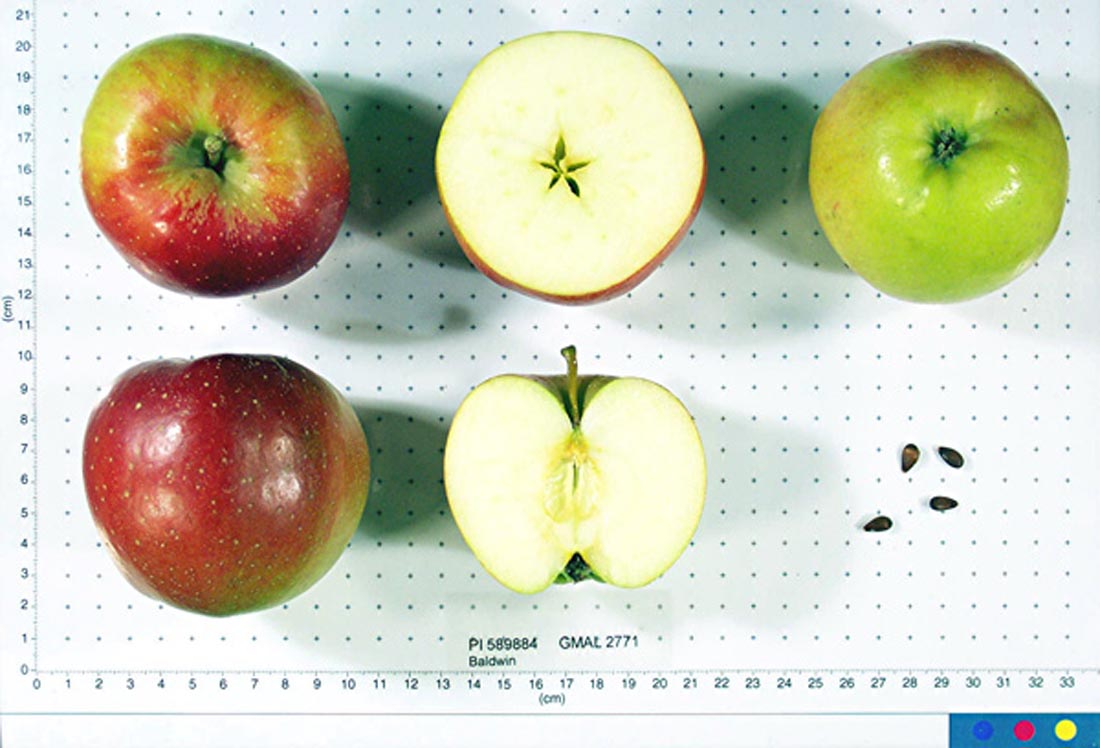 Summary: Originated in the 1700s in the northeastern United States of America, this baking apple is also favoured for cider.

Identification: Considerable variance exists in the Baldwin because numerous strains have evolved. The standard is a medium to large apple, round tending to conic, sometimes irregular shape. The skin is smooth and tough, light yellow background mottled with bright red and faintly streaked with deep red, faint on the shaded face. Look for small, grayish lenticels, slightly indented and more numerous toward the base. The eye is large and partly open, set in a deep and wide, ribbed basin which is surrounded by a five-knobbed crown. The stem is medium to long and slender and set in a deep, wide cavity which is typically russetted. Skin is thick and somewhat tough.

Origins: A chance seedling found growing in the lane between the house and barn on a disused farm bought by John Ball in 1740 near Lowell, Massachusetts (U.S.A.). A cutting was given to Colonel Loammi Baldwin who propagated it, planting the offspring extensively on his land. He further popularized it by giving cuttings to his neighbours. By the 1830s, the Baldwin had become one of the most popular apples at Boston markets. Its thick skin and firm flesh made it a favourite for export at the time. However, a particularly cold season wiped out most of New England's orchards and the Baldwin fell out of favour, replaced primarily by the more cold-tolerant McIntosh . The Baldwin was first listed by James Thacher in his 1822 edition of "The American Orchardist" with the comment that the Baldwin "...is a very valuable red apple, large and beautiful, fine flavoured and will keep until April. It is in high estimation in Massachusetts."

Ploidism: Triploid. Does not produce viable pollen, needs to be grown in proximity of a suitable source of pollen.

Notes: There is a monument on Chestnut Street in Wilmington, Massechusetts, near the site of the original tree which was blown over during a windstorm in 1815.

Cold storage: Keeps for up to four months and best after two months.

Harvest: It tends to produce well every second or sometimes third year with the fruit ripening in the middle of the second period. 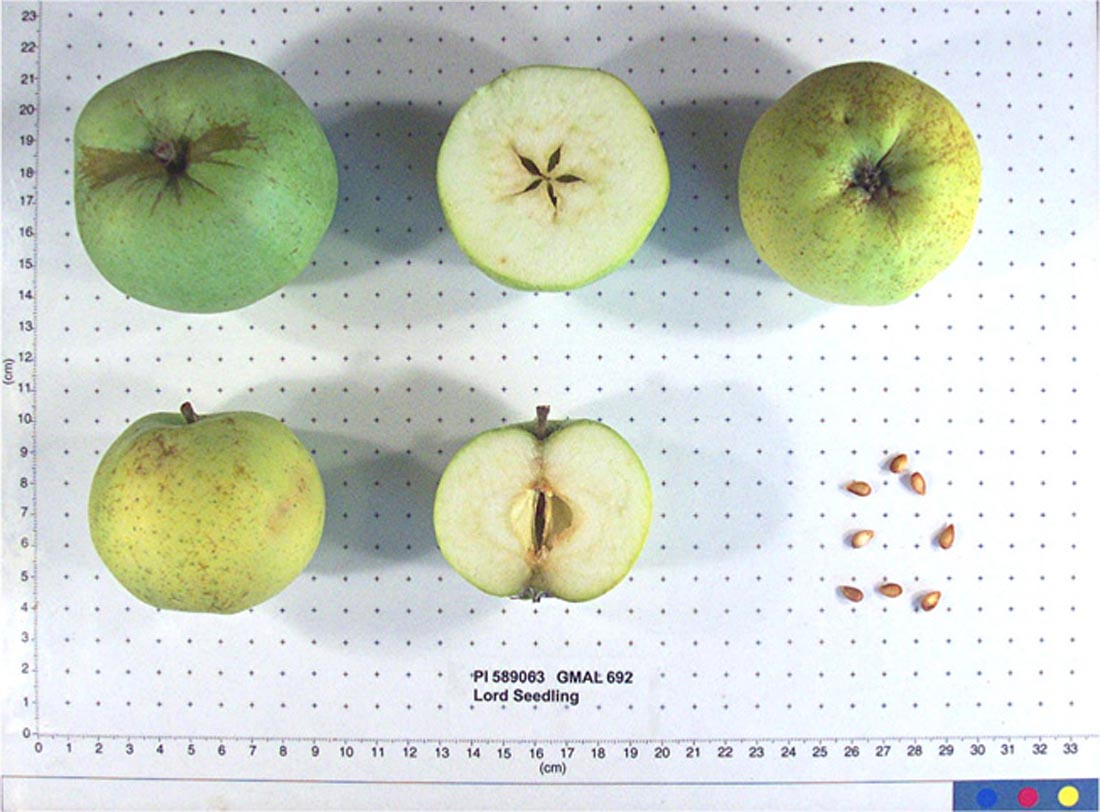 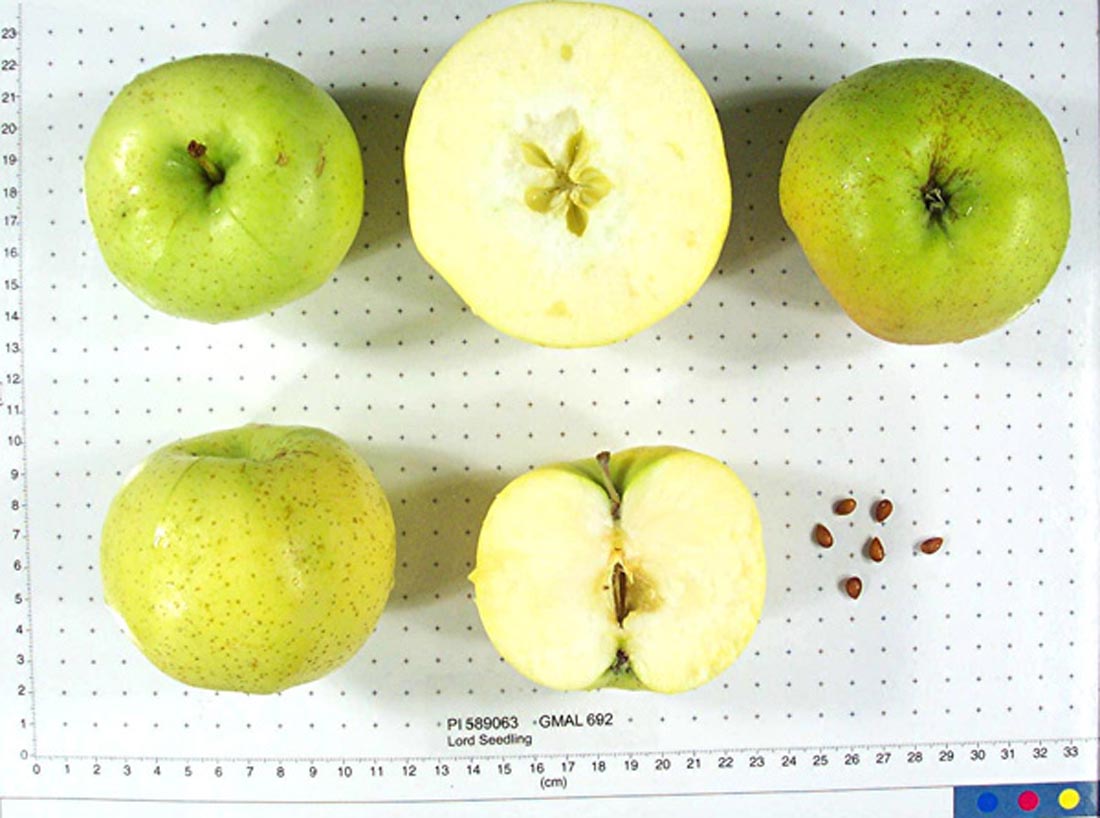 characteristics: The flesh is ?????, dense. NuttyAromatic. Does not keep well.