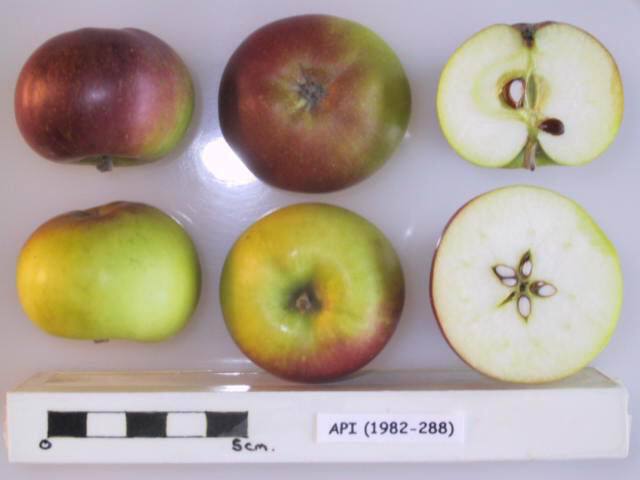 Identification: Small to very small and flat round and ribbed at the crown. The skin is thick, smooth and glossy. The glossy skin base colour is yellow washed bright red on the sun-exposed surface. The stem is medium short and set deep in an open basin, sometimes lightly russeted. A small, tightly closed calyx is set in a shallow and ribbed basin.

Uses: Traditionally used as a fresh eating apple. For the best flavours and aromas, eat this apple with the skin on. Also used to make juice and cider.

Origins: Legend has it that this apple was brought to Rome from the island of Peloponnesus off the south coast of Greece by Consul Appius Claudius. Whether or not the story is true, the fact remains that an apple fitting the description of the Api was well known by the Romans at the time of naturalist and philosopher Pliny the Elder. And not all historians agree. French pomologist Jean Merlet claims in his 1667 tome that the Api was found as a wild seedling in the Forest of Api, an ancient stand located in Brittany (France). That version may have originated with Le Lectier, procurer for King Louis XIII of France, in 1627. It made its way to Great Britain in the late 1600s and from there to North America under the name Lady Apple.

Cultivation: Moderately vigorous, small and compact, upright tree that bears fruit on spurs. Produces heavy crops but is slow to start and has a strong tendency to produce best every other year. The fruit grows in clusters.

Notes: These apples were often used to decorate Christmas wreaths and even Christmas trees in Europe during the olden days.

Harvest: Ready for harvest during the first half of the fifth period.