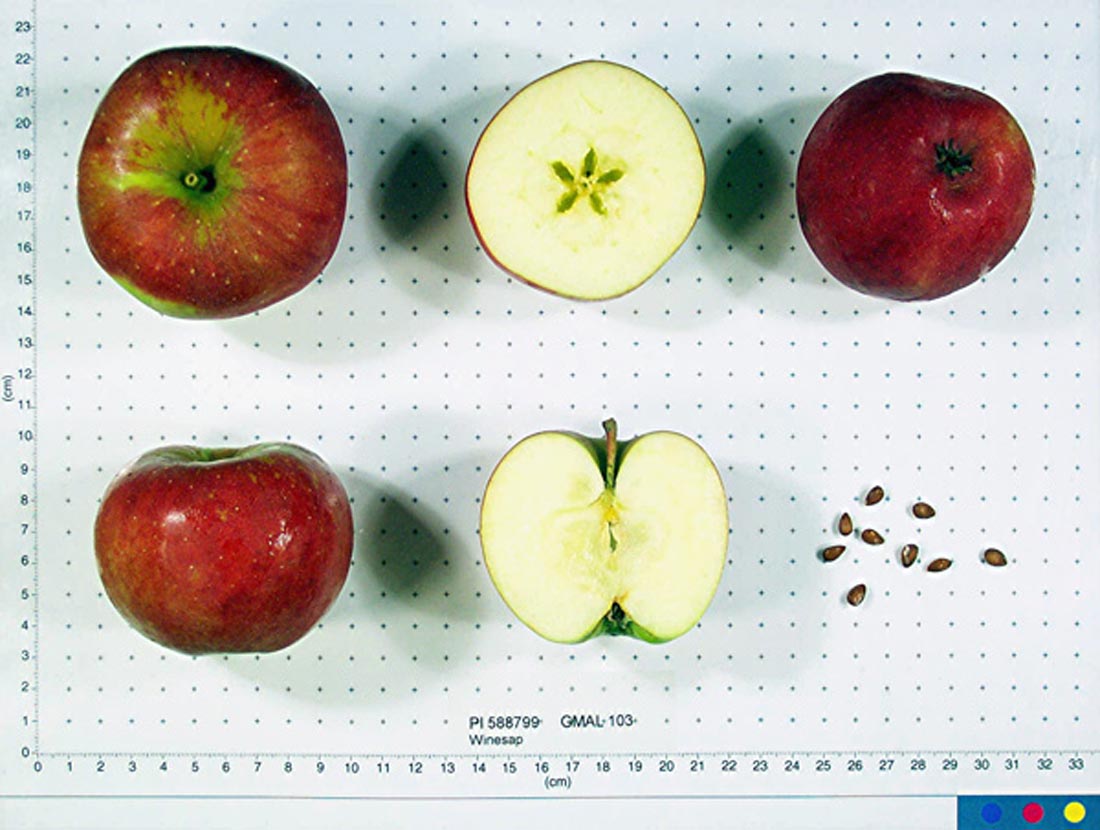 Identification: Medium to large, round conic and slightly ribbed. Skin is tough. Smooth and yellow with deep red, almost purple blush on the sun-exposed face, sometimes vague stripes can be detected. Some russet netting, especially around the stem cavity. A few small russeted lenticels. The calyx is small and open, set in a shallow and narrow basin. The stem is long and slender, set in a moderately deep and funnel shaped cavity. The calyx is small, tight and set in a shallow basin.

Characteristics: Flesh is yellowish with reddish veins. Moderately fine-grained. Crisp and juicy, sweet and somewhat tart with a spicy, red wine flavour and slightly bitter. However, a number of mutations of this variety are being cultivated and though they are striking look at, they are somewhat bland in flavour, giving this variety a reputation it does not deserve. Flesh browns quickly when exposed to air.

Uses: Excellent for fresh eating, pies and cider. Should be left to mature in storage for the best cider flavours.

Origins: The variety was first documented by Dr. James Mease of Moore’s Town, New Jersey (U.S.A.), in 1804 as a cider apple, noting only that Samuel Coles had been cultivating it for some time in the area. No mention is made of its origins or parentage. The noted pomologist William Coxe made mention of the Winesap in his 1817 edition of "A View Of The Cultivation of Fruit Trees" the stating that it is “one of our best cider fruits and is much esteemed as a good eating apple.”

Cultivation: Moderately vigorous. Frequently begins to produce fruit as a three-year old tree and bears annually, not so well as the tree ages. Thinning necessary to prevent overproduction.

Notes: The Bloody Butcher , an Irish variety, is also sometimes referred to as Winesap.

Cold storage: Keeps up to six months in cold storage. Stands up to freezing.

Vulnerabilities: Highly susceptible to scab, less so to fire blight. Resistant to rust and mildew. Prone to water core.

Harvest: In the latter half of the fourth period (160 to 180 days from petal fall). The fruit hangs well beyond maturity.

characteristics: The flesh is cream-coloured, firm, and crunchy. Juicy, sweet tart and spicy with a hint of cloves.

summary: This is the original apple that started the massive trend to supermarket apples with its mutation, best known as the Red Delicious.

characteristics: The flesh is whitish in colour, often with a green tint. Juicy, mild in flavour with a tart finish and sweet aftertaste. The cut apple resists browning. Plan on ...

characteristics: The flesh is pale cream coloured with some reddish stains next to the skin. Crisp, juicy and sweet. Perfumed and aromatic. Holds its shape well when cooked.