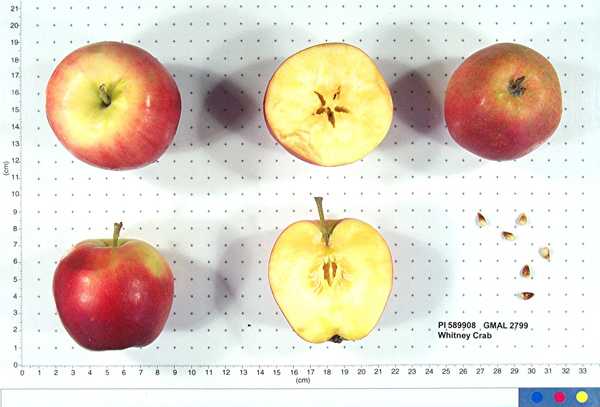 Identification: Small tending to medium size, round tending to conic. Yellow base colour over which is a pattern of bright red stripes. The stem is slender, set in a medium wide and deep cavity. The calyx can be medium to large, closed and sometimes partly open, set in a wide and shallow, pleated basin.

Origins: Grown by A.R. Whitney of Franklin Grove, Illinois (U.S.A.) during the mid-1800s as Whitney Number 20, one of three seedlings grown from among a large number of seeds taken from Siberian crabapples. First documented by Dr. John A. Warder in the 1869, Volume V edition of "Tilton's Journal of Horticulture."

Cultivation: Moderately vigorous. Upright, spreading. Starts to produce first fruit quite young on its own roots. Does best in loamy, well-drained soils.

Ploidism: Diploid. Self fertile, but produces best crops in the proximity of a source of compatible pollen.

Harvest: Ready for harvest late in the third period or early in the fourth..

Fruit: round yellow red stripe Ripens at the start of autumn

characteristics: The flesh is cream-coloured, coarse-grained, firm and crunchy. Juicy, sweet and slightly aciditic, with hints of strawberry.