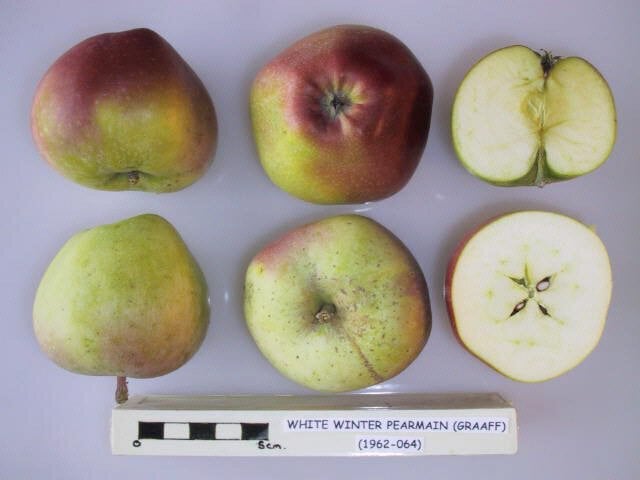 Identification: Medium to large and round oblong tending to conic and lightly ribbed. Marked with medium size russet lenticels which are most abundant toward the eye. Smooth, tough, green skin maturing to yellow with a waxy feel as it ripens. The eye is medium to large and closed, set in a medium deep and medium wide basin which is sometimes puckered. The stem is medium long and set in a deep and moderately open cavity which is often lined with russet. The lenticels are abundant and russeted, slightly inset.

Origins: In all probability, the White Winter Pearmain originated as one of many seedlings that sprang up during the European colonization of North America, most likely in the fertile central eastern portion of the continent and one of its parents was likely a pearmain-style apple. What is known is that the apple, along with a second variety, was transported westward by horseback some time in the late 1700s or early 1800s as scion wood to what is now the State of Indiana. Along the way, the labels for the both varieties of cuttings were lost, but were grafted nevertheless. When they finally fruited, it was determined that both were pearmains, one red and the other pale, hence the early reference to the Red Pearmain and the White Pearmain. In 1858, the American Pomological Society decided that the Red Pearmain was actually the Esopus Spitzenburg, while the White Pearmain resembled a number of varietals but none could be matched. As a result, it was given the name White Winter Pearmain. There is, however, still speculation about its origins and some sources have suggested that it may be one of the Old World pearmains, possibly dating back to the years 1200 and brought to North America in the early 1700s as pips.

Cold storage: Keeps up to four months. The flavour matures in storage.

Harvest: In the second half of the fourth period.