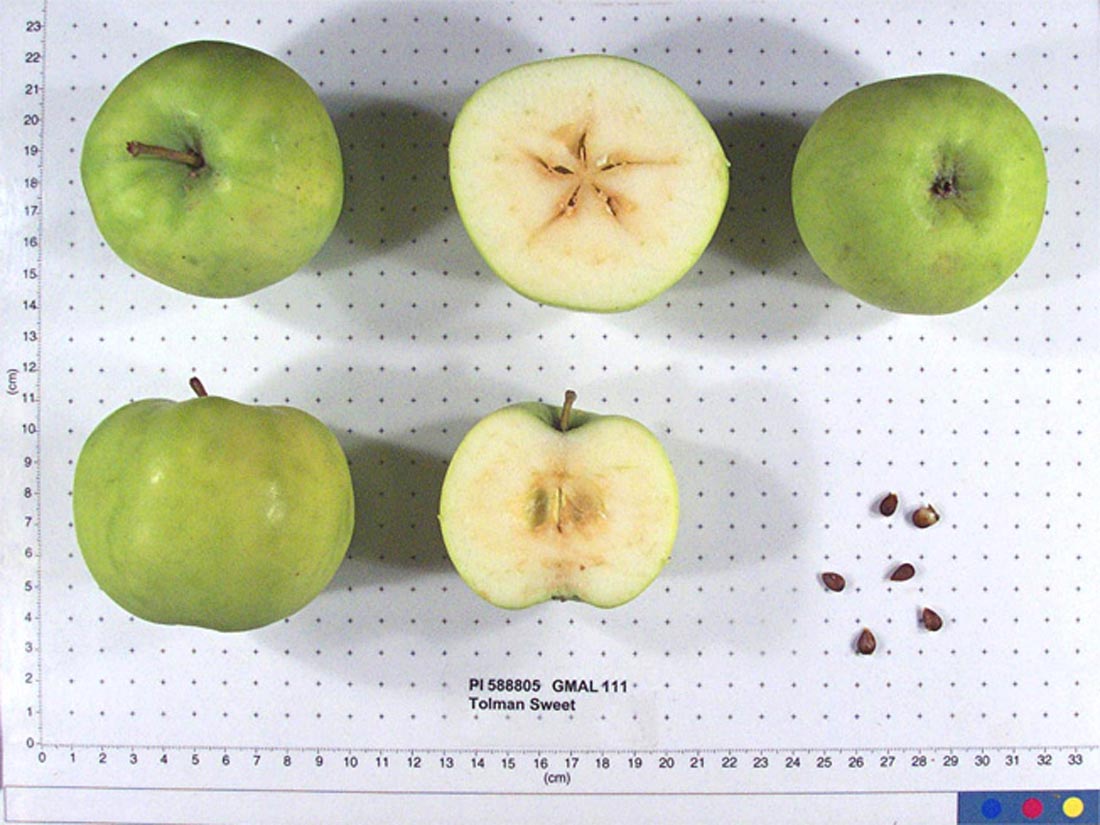 Identification: Medium size, round, sometimes round-conic, and lightly ribbed which is most noticeable at the crown. The skin is pale yellow, with a faint red blush on the sun-exposed face and sometimes a light russetting radiating across the face. A faint suture line can be seen at both ends, although that line can be quite well defined at times. Sparsely marked with greyish lenticels. The stem is slender and medium tending to long, set in a open and deep, russetted cavity.

Uses: Sometimes eaten fresh, but mostly used for making pies and sauces as well as dried apple rings. A good choice for making American-style cider, providing abundant sugars, good acidity and aromas. Seedlings of this variety were used for root stock at one time.

Origins: Most sources agree that the Tolman Sweet originated in the northeastern United States during the late 1700s or early 1800s and that it was likely a cross of Sweet Greening and Old Russet. However, the place of origin is, for the most part, uncertain. The popular version claims it hails from the Dorchester area of Massachusetts (U.S.A.). The nearby state of New York also has a bid with the story that Thomas Tallman raised it on his land near Geneva, New York from pips collected on an Indian reservation near the Finger Lakes. Even the prominent pomological writers of the 1800s preferred to sidestep the issue. The variety was first documented in 1822 by James Thacher in "The American Orchardist" where it is listed as the Tolman Sweeting with Thacher's comment "I have not been able to trace to its origin this justly admired apple." Robert Manning lists it as Tolman Sweet in the February 1841 issue of "The Magazine of Horticulture" with the comment "An excellent table or baking apple during the winter." A.J. Downing is less kind in his description of this apple in his 1845 edition of "Fruit and Fruit Trees of America" with the acknowledgement "The Tolman's Sweeting is scarcely second rate as a table fruit, but it is one of the most popular orchard sorts, from its great productiveness, its value as food for swine and cattle as well as for baking." He states that it is native to Rhode Island.

Notes: The apples bruise easily and must be handled with care. In the past, seedlings of Tolman Sweet were used for grafting root stock.

Harvest: Over a span of several weeks starting late in the fourth period. The fruit shows no tendency to drop at maturity.

characteristics: The flesh is white, crisp. Very sweet and, when cut open, it has a distinct aroma of bananas.