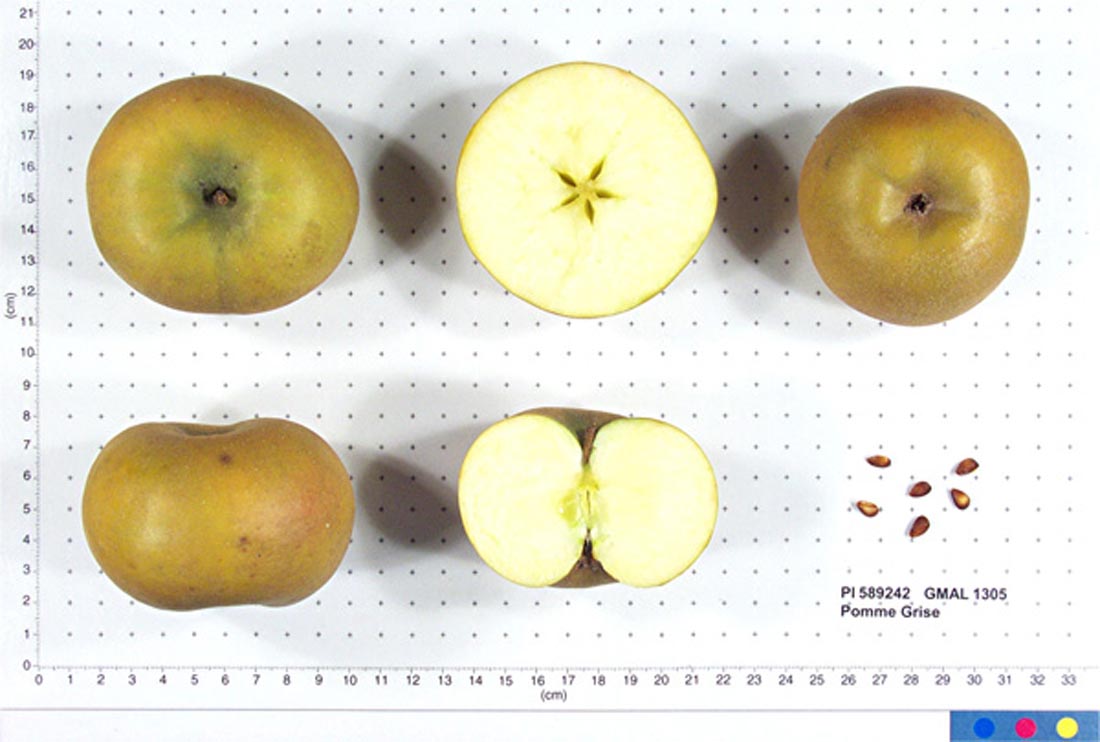 Identification: Medium to small fruit, round to round flatted. The skin is thick and greenish yellow which is covered almost entirely with brown russet. Look for green streaks and a pink blush to show through the russet. The stem is short and slender, set in a narrow and deep cavity. The calyx is small and partly open, set in a deep and narrow basin.

Characteristics: The flesh is creamy yellow, juicy, firm, medium coarse-grained and crisp, richly aromatic with a sweet, nutty flavour and hints of vanilla.

Uses: Excellent dessert apple, but also favoured as a cider apple for its flavours and its sugar content.

Origins: The origin of this fine dessert apple is somewhat muddled, but its roots are likely firmly anchored in continental Europe, perhaps back into the 1600s or earlier, in the form of the Reinette Grise as described by the noted French pomologist André Leroy in his "Dictionnaire de Pomologie, Volume IV" (published in 1873). It is assumed that the Pomme Grise arose either a mutation or a seedling of the Reinette Gris which was carried to North America's St. Lawrence River Valley by Swiss or French settlers during the latter half of the 1600s. It was first documented in 1803 by William Forsyth in his "A Treatise on the Culture and Management of Fruit Trees" as Pomme Gree with the comment "a fine apple from Canada." In 1905, S.A. Beach stated in "The Apples of New York, Volume 1" that "The Pomme Grise or fruit of this type has long been known in cultivation among the French in the vicinity of Montreal and in other portions of the St. Lawrence valley." During the late 1700s, according to Forsyth, the Pomme Grise made its circuitous route back to Europe when it was introduced to Britain by amateur orchardist Alexander Barclay.

Cold storage: Improves in storage. Keeps up to three months after which it it becomes shriveled though still sweet and flavourful.

Harvest: Ready for harvest toward the end of the fourth period or into the start of the fifth.