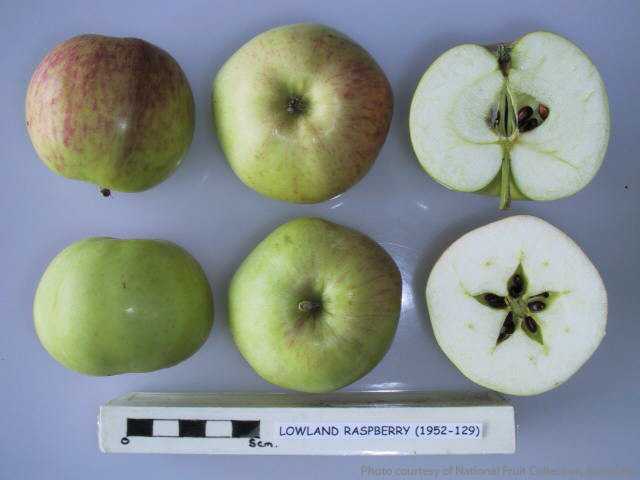 Identification: Medium size tending to large. Round to round conic and slightly angular faces. The base colour is greenish yellow maturing to ivory over which is a pattern of marbled red striping on the sun-exposed face. The calyx is small and closed in a shallow, open basin which is lightly ribbed. The stem is medium length and medium thickness set in a deep and narrow cavity which is usually russetted with rays extending toward the shoulder.

Characteristics: The flesh is white, sometimes with red stains under the skin. Fine-grained, tender and very juicy and aromatic with a slight raspberry flavour.

Origins: Originated in the Baltic province of Lievland (Lithuania) before the mid-1800s where it was grown by a Mr. Gögginger under the name Malinovskoe Lievlandskoe. It was introduced into the United States in the 1860s by A.G. Tuttle of Bababoo, Wisconsin (U.S.A.). There appears to be no record of its parentage. Two other similar raspberry-flavoured apples existed during the mid-1800s and were described by Charles Gibb in "Russian Apples Imported by U.S. Department of Agriculture in 1870": the Malinovskoe grown in Novgorod (Russia) and the other found in the area of St. Petersburg (Russia).

Harvest: Ready for harvest in the middle of the third period. Fruit clings on tree beyond ripeness.