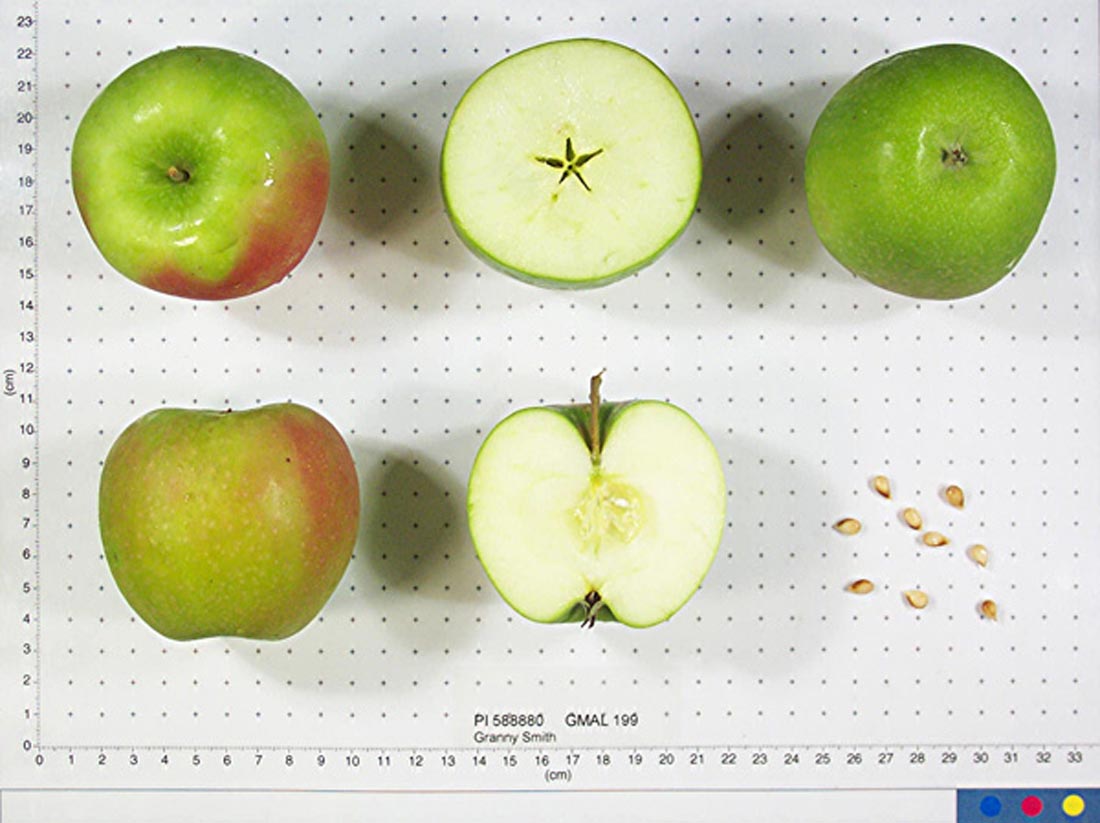 Identification: A medium size apple, round conic to conic in shape and occasionally with indistinct ribbing on the face and more pronounced at the crown. The smooth, tough skin is characteristically bright green, sometimes with a purple-brown flush on the sun-exposed side, though the blush is usually an indication that the apple has been grown in cooler climates. The lenticels are conspicuous and often set in halos. Somewhat waxy feel. The stem is slender and long, set in a deep and narrow cavity.

Characteristics: The flesh is greenish white, firm and coarse-grained. The apple is crisp sweet-sharp and refreshing.

Uses: Eaten fresh and good for cooking. Popular for use in salads because they tend not to brown when cut. Tart enough for apple pie.

Origins: Named for Maria Ann Smith (née Sherwood) (1799 to 1870) who had planted some apple pips in the garden of the 24-acre farm she and her husband, Thomas Smith, shared in New South Wales (Australia). The pips came from several apples, identified as French Crab, she had been given at the Sidney market by orchardist Thomas Lawless of Tasmania. Only one of the pips sprouted and was carefully nurtured to eventually bear fruit in 1868. When it did, Maria Ann Smith started using the fruit for cooking. The Smith family began marketing the apple and it was shown as Smith’s Seedling at the 1890 Castle Hill Agricultural and Horticultural Show, two decades after Anne Smith passed away. In 1895, the cultivar was officially named Granny Smith’s Seedling by Albert Benson, Fruit Expert for the NSW Department of Agriculture, and extensive cultivation was carried out at the Bathurst Experimental Station. From the beginning, it was highly praised as “the very best cooking apple, the best, carrier, best drying apple and, if allowed to remain on the tree until fully ripe, the placed in straw until it mellows, it takes its place among the best eating.” Nevertheless, it took until the middle of the 1900s before it was extensively cultivated and marketed worldwide.

Cultivation: Moderate vigorous and upright spreading with a moderate weeping tendency, bearing fruit on one- and two-year-old, drooping branches (some spur-bearing mutations have been developed). Avoid aggressive pruning of the headers, since this will promote vegetative growth rather than flower bud development. Crops heavily on an annual basis, though has a slight tendency to bear biennially if allowed to overcrop. Tolerates Hardiness Zones 5 to 9.

Ploidism: Diploid. Self fertile but produces best with a nearby source of compatible pollen.

Harvest: Fruit needs needs mild winters and a long, warm growing season (180 to 210 days after petal fall) to ripen fully. Ready for harvest by the middle of the fifth period.

characteristics: The flesh is creamy white, crisp. Sweet-tart and juicy. 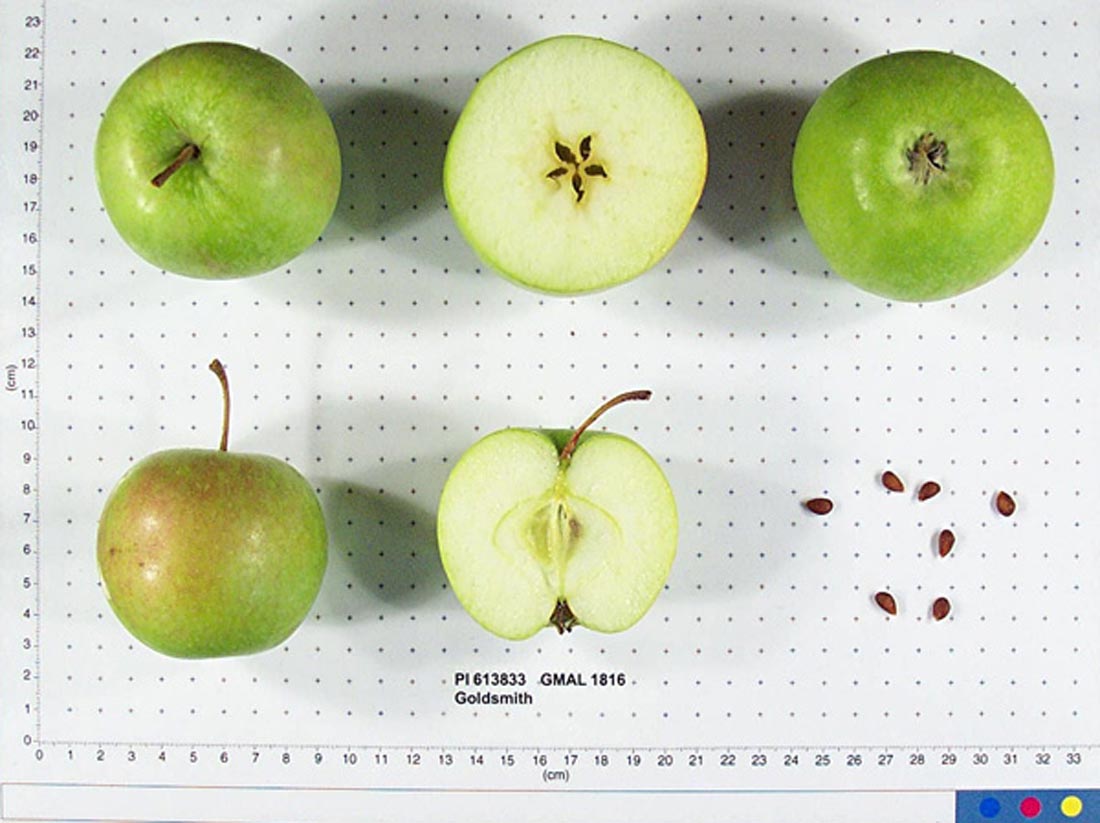 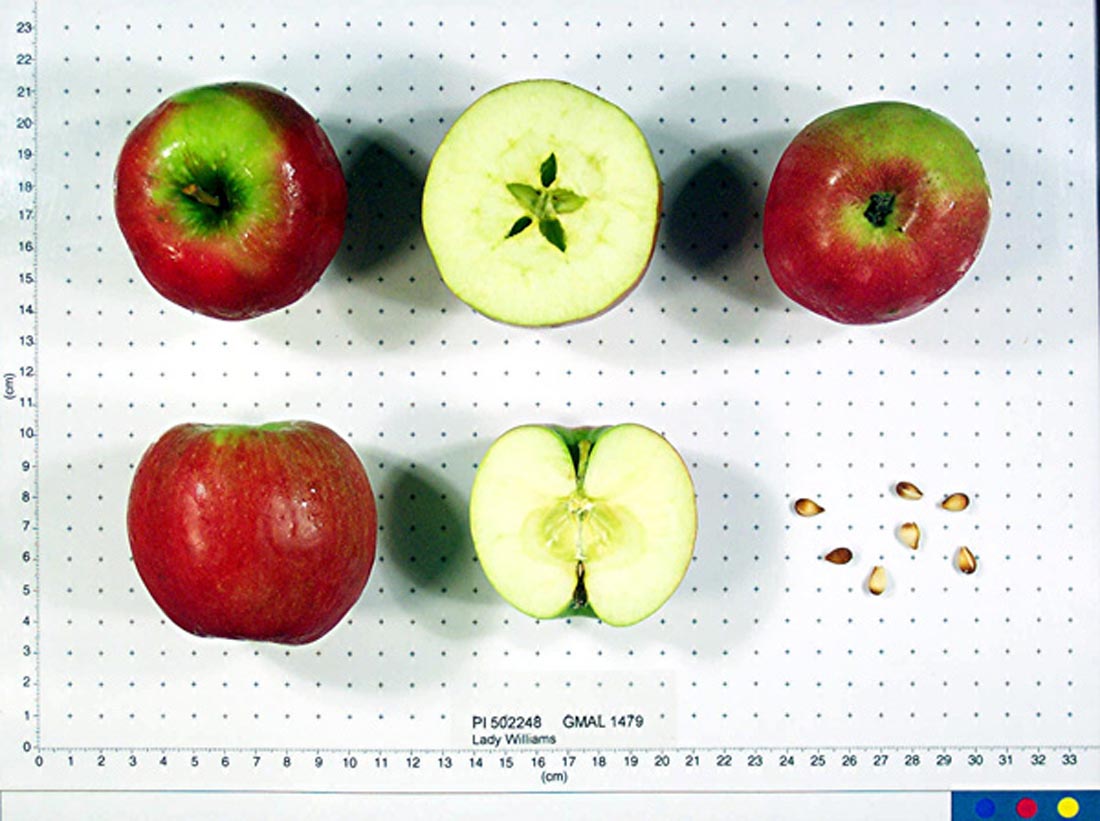 characteristics: The flesh is white, dry and soft. Quite sharp. Keeps three months in cold storage.

origins: A seedling of an open pollinated Granny Smith raised by Deacon s Nursery in Godshill, Isle of Wight (UK)

summary: This excellent eating apple originated in the heart of Texas as a seedling of Granny Smith. Unique in appearance and flavour, but favours warm climates.

characteristics: The flesh is white, medium texture, and firm. Juicy and mildly aromatice. Keeps up to five months in cold storage.