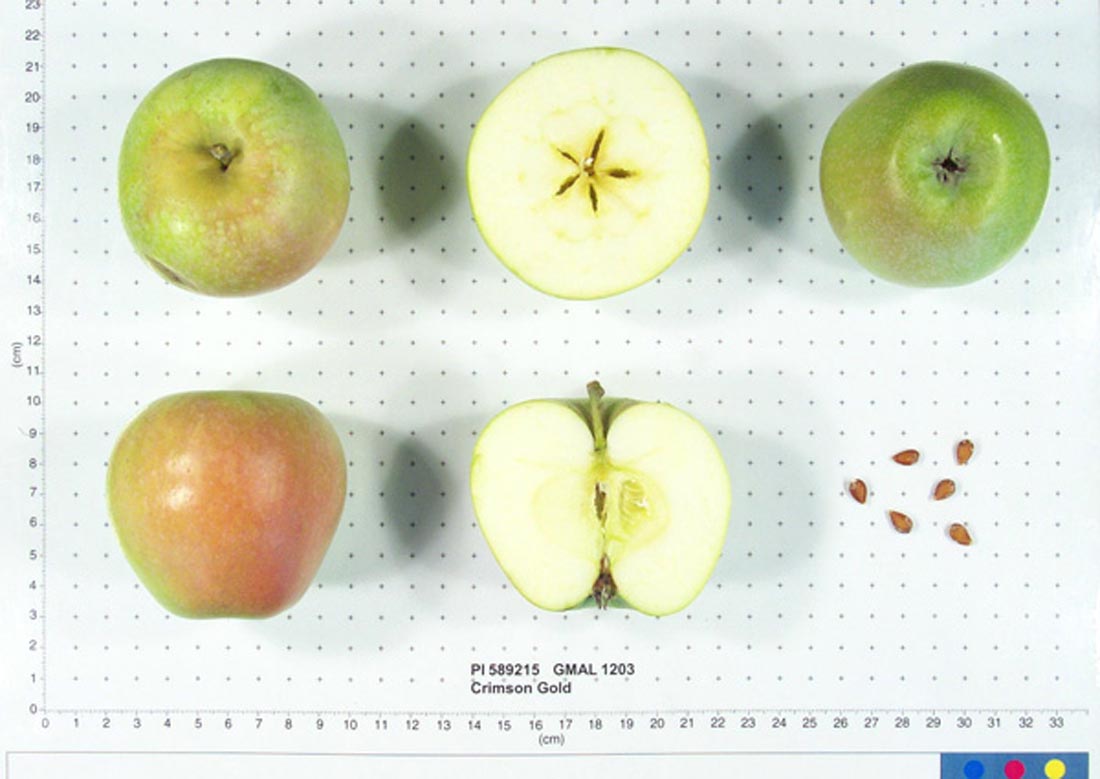 Identification: Medium size, round conic. Deep, almost solid red blush over a creamy base colour with a blueish grey bloom at maturity. The eye is small and closed, set in a wide and shallow basin. The stem is short and moderately stout, set in a deep and narrow basin with russetting extending onto the shoulder. The calyx is large and open set in a narrow and somewhat shallow basin.

Origins: This was the last of seven apples developed by Albert Etter at his Etterburg breeding facility in California (U.S.A.) the 1930s and sold to California Nursery Company, a California based nursery, which introduced the Crimson Gold in its 1944 catalogue. However, the company experienced a period of troubled times during which some of the apples were mislabelled and the samples sent to the U.S. Germplasm Repository in Geneva, New York, were actually Wickson Crab and distributed as the Crimson Gold. The mistake almost led to the disappearance of the Crimson Gold, which was supposed to be a fine dessert apple, whereas the Wickson is a tart, astringent cider apple. The error was corrected during the 1970s after an old and decaying trial tree with the zinc Crimson Gold name tag still attached to one of its branches was discovered in Etter's orchard. The pedigree of Etter's apple still remains a mystery. Certainly it is not the Spitzenburg x Newton Crab cross which is actually the pedigree of the Wickson Crab. Nor is it the bright red supermarket apple (Svatava) developed in the Czech Republic and trademarked Crimson Gold.

Cultivation: Produces heavy crops every other year. Biennial. Thin at fruit set to get the best size fruit.

Notes: The Crimson Gold should not be confused with the Svatava cultivar which was developed in the Czech Republic is marketed under the trademarked name Crimson Gold. Although Albert Etter started the process of filing patent for his apple which was to be called Crimson Gold, he died in 1950 before the process could be completed and as such the breeders of the Svatava cultivar were able to lock the name Crimson Gold. Since their patent applies in the United States, Etter's apple cannot be marketed as Crimson Gold and, for this reason, it is now officially referred to as Little Rosybloom, the name originally favoured by Etter for that apple.

Harvest: Ready for harvest toward the end of the fifth period.