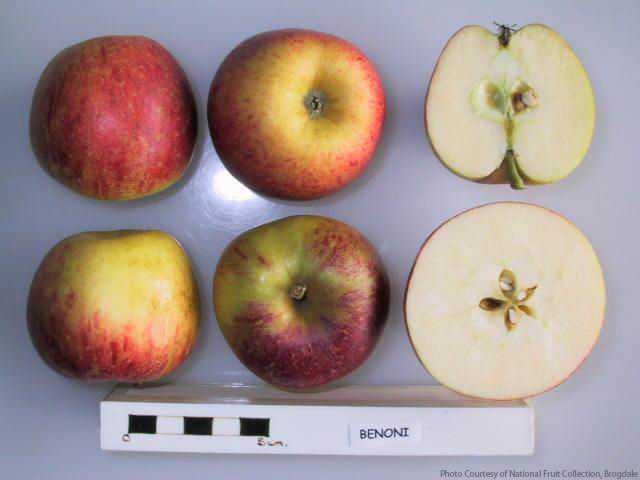 Identification: Small to medium in size. Round and conic, narrowing to the crown which is often higher on one side than the other. Nonsymetrical and faintly ribbed at the eye. Thin, smooth skin, orange-yellow with stripes of intense carmine. Covered with scattered, small, white lenticels. The calyx is small and partly open, set in a wide and moderately deep basin which is often puckered. The stem is short to very short, slender and set in a moderately deep basin, often surrounded with a greenish russetting. It feels greasy when ripe.

Origins: Introduced by amateur pomologist Mason Richards of Dedham, Massachusetts (U.S.A.), in the 1835 issue of the "Magazine of Horticulture." The original tree, a chance seedling, had been found on his farm 25 years earlier.

Cultivation: Vigorous and upright. Bears fruit quite young. Production tends to be heavy but it bears fruit every second year. Tolerates Hardiness Zones 4 to 8.

Harvest: Prior to the end of the third period