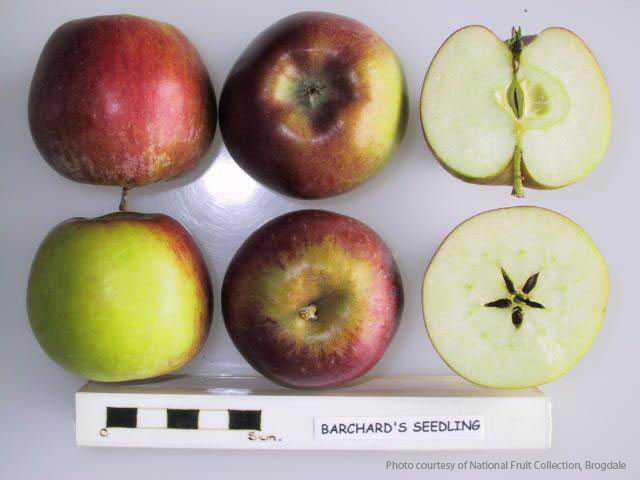 Identification: Small to medium size, round and slightly taller than its diameter. Rounded ribs running to a distinct crown at the basin end and prominent russetting at the cavity end. The skin is glossy with a greenish-yellow base colour over which is a deep red wash with darker red striping on the sun-exposed side, greenish on the shaded side. The stem is medium to long, slender and set in a deep, narrow cavity. The calyx is somewhat small, closed and upright, set in a funnel-shaped basin.

Characteristics: The flesh is white, fine-grained, firm and crisp. Sweet and pleasantly tart.

Origins: According to British pomologist Robert Hogg in the 1884 edition of "The Fruit Manual: The Fruits and Fruit Trees of Great Britain," the Barchard's Seedling "was raised was raised by Mr. Higgs, gardener to R. Barchard of Putney Heath, Esq., Putney Heath, Surrey and was brought into notice by being exhibited by Mr. Alexander Dancer of Fulham at a meeting of the British Pomological Society in 1856." He added that is "An excellent culinary or dessert apple; ripe in October. The tree is a constant bearer. It is now much grown in some of the market gardens about London, its fine colour making it attractive in the markets." There appears to be no record of the seedling's parentage.

Harvest: Ready for harvest early in the fifth period.