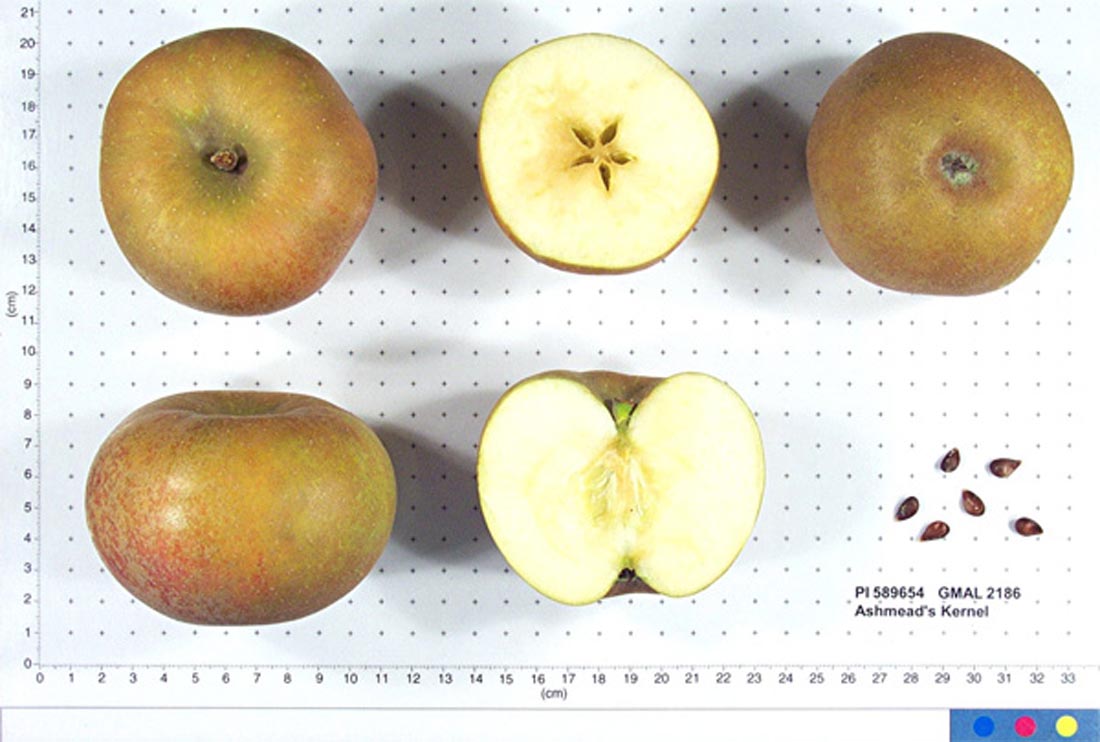 Identification: The apples are small to medium in size. Round-flattened to round-conic, often lopsided. The skin is dull, yellowish-green, sometimes with a gold-brown blush to it. Some cinnamon russetting and occasionally brownish stripes. The calyx is large and open, set in a medium deep, narrow and puckered basin. The stem is short to medium length and medium thickness, and set in a deep, narrow cavity.

Characteristics: Mouth-puckering when first picked but, once it has aged, the yellowish flesh is crisp and firm, juicy with a good balance between sweetness and acidity. Pear-drop flavour. At its best when the skin is actually a bit wrinkled. Browns quickly after being exposed to air.

Uses: Apple sauce or can be eaten fresh. Provides tartness and sugars for cider blends.

Origins: Developed from seed planted by a William Ashmead sometime around 1720 in the gardens of what later became Ashmeade House in Gloucester (U.K.). It was offered for a time by Brompton Park Nursery in the late 1700s, but never really received notice from outside the region. It lingered for three centuries in obscurity before it was finally recognized by apple lovers around the world.

Ploidism: In 2008, nuclear DNA content tests carried out at the Plant Cytometry Service in The Netherlands confirmed long-standing suspicions that this variety is triploid, providing no viable pollen to itself and other apple trees.

Notes: At one time, this variety was called Doctor Ashmead's Kernel. Where it got the honourific “Doctor” is unknown since the “Doctor Ashmead(e)” documented to have lived in Glouster at the time had nothing to do with the garden where the seedling was grown. The William Ashmead who lived there and was likely more instrumental in the planting of the seedling was an attorney. No physician lived at Ashmeade House then or later, but attorneys were, at the time referred to with the honourific “Doctor.”

Cold storage: Keeps for up to four months and best after at least one month.

Vulnerabilities: Somewhat resistant to scab and blight. Resistant to rust and mildew.

Harvest: In the early part of the fifth period.