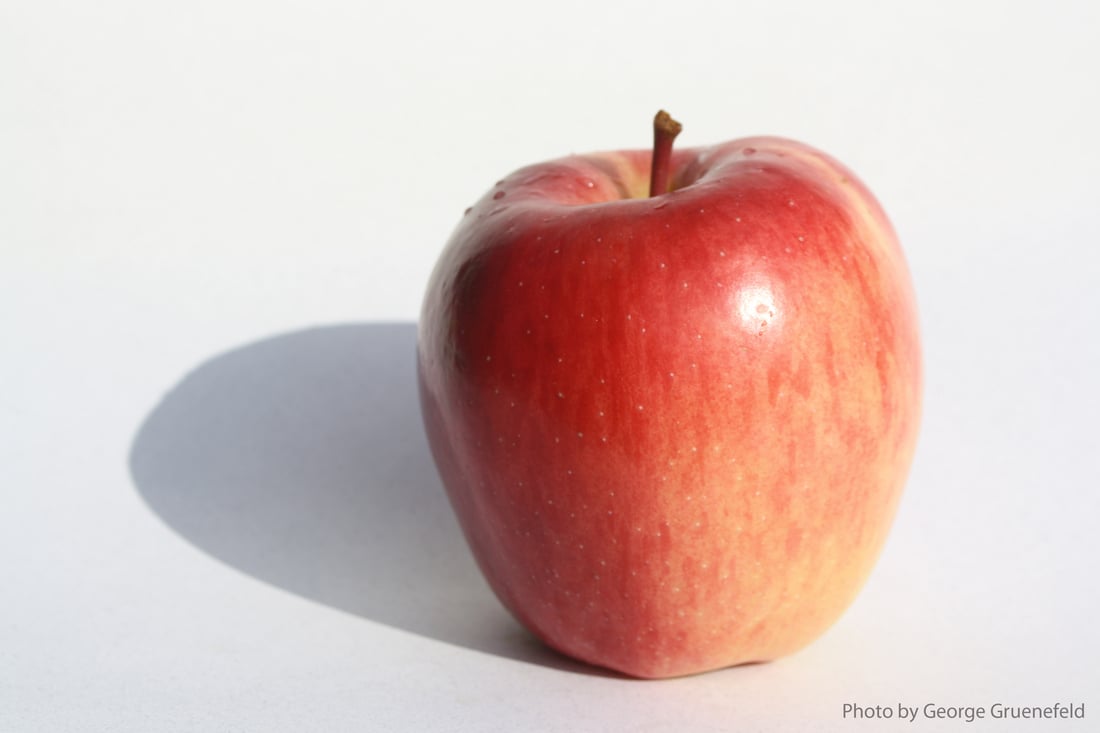 Identification: Medium to large size. Conical, angular shape similar to that of Red Delicious apples. Some weak ribbing and crowning. The background skin colour is creamy white or yellow with a red blush that covers three quarters of the apple and wide, faint stripes. Lenticels are small, cream coloured. The stem is slender and medium length, set in a narrow cavity. The skin develops a slight greasy feel in storage.

Characteristics: The flesh is cream coloured, fine textured, crisp and juicy. It is sweet, with little acidity and a honeyed, perfumed flavour. Turns brown within an hour after being cut open.

Uses: Essentially an eating apple, the Ambrosia is also excellent in salads. Great for salads and fruit plates. In baking, Ambrosia apple slices tend to retain their shape more so than most others. Use less sugar than most other apples because of its sweetness.

Origins: In 1987, in the process of replanting an area of their newly acquired plum orchard near Cawston, British Columbia (Canada), to Jonagold apples, Sally and Wilfred Mennell found a seedling apple that sparked their interest and decided to let it mature. It bore its first fruit in 1989 and the fruit turned out to be excellent. They subsequently grafted cuttings from it onto 180 rootstocks in 1991 and, by 1993, they had 400 Ambrosia apple trees in their orchard. The Mennells speculate that its origins are in the Starking Delicious and Golden Delicious apples grown in the orchard prior to its conversion to plums.

Cultivation: Moderately vigorous tree that grows upright and tends to spur along the trunk. Fruit is borne on spurs although there are reports of semi spur tendency. They produce dense masses of flowers which need to be thinned in order to get the best harvests. Although three and even two year old trees will try to produce fruit, the blossoms should be removed until the tree is properly trained for at least two years. Be aware that the wood is somewhat weak and the branches prone to breaking under load. The high sugar content can cause splitting and there is an occasional tendency to sunburn. Not a good variety for growing in damp or humid surroundings.

Cold storage: Keeps up to four months after which it loses flavour and while it remains sweet, the texture becomes soft and the flavour somewhat musty.

Harvest: Ready for harvest in the second half of the fourth period and the apples are best picked in two harvests.