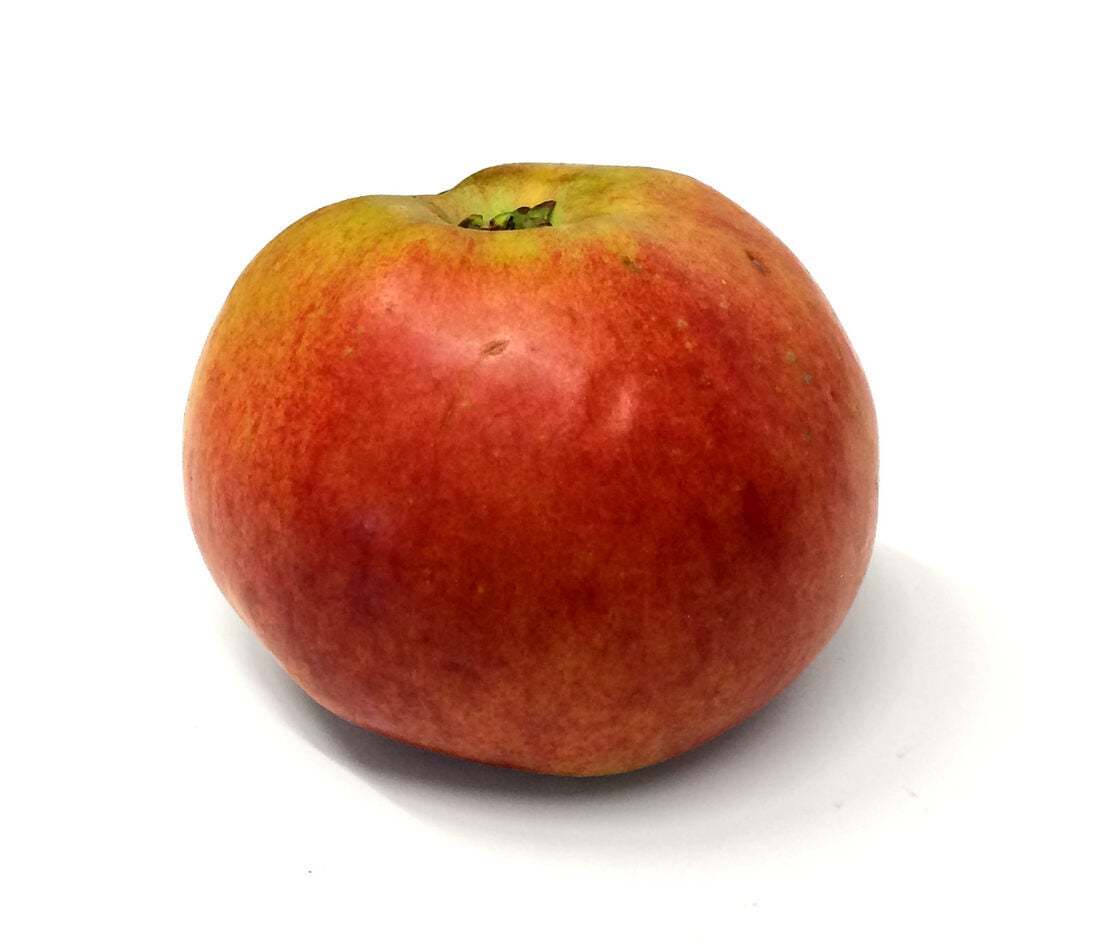 Identification: Very large, round to round conic with vague ribbing. The base colour is pale greenish yellow and coloured for one half to three quarters with bright scarlet flushes and broken red stripes. Russet stripes often radiate out from the stem cavity. Lenticels are moderate in number and small, almost inconspicuous. The skin is thick, tough and smooth but tends to have a waxy feel after being in storage. A partly open calyx sits in a narrow basin surrounded by a knobbed crown.The stem is short and stout and set in a deep and round, russetted cavity. Becomes greasy in storage.

Characteristics: Flesh is white with a faint tinge of yellow. Coarse texture. Juicy and sweet with winey flavours.. Sweet when eaten fresh, otherwise quite sharp.

Uses: Good for eating fresh just off the tree but turns mealy within a day or two. Makes a wonderful, lemony apple sauce.

Origins: Likely originated in Ukraine sometime during the 1700s where it was thought to have been called the Aporta. The name Alexander was attributed to this apple in honour of Russia's Emperor Alexander I by nurseryman James Lee Jr. of Hammersmith (U.K.) who introduced the apple to the British market in 1805 on the premise that it would attract attention due to its enormous size. In the course of its wanderings, the Alexander has picked up an impressive variety of names; Brogdale's National Fruit Collection currently lists 83 synonyms for this cultivar.

Cultivation: Vigorous, upright spreading tree, but tends to droop after heavy harvests. Precocious. Bears fruit on spurs. Good cropper. One of the few apples that will grow true from seed. Well suited to espalier. Hardiness zone 4.

Notes: According to pomologist Robert Hogg, a sample of this variety was displayed by nurseryman James Lee Jr. of Hammersmith (UK) at the London Horticultural Society meet in 1817. It weighed 538.6 grams, was 14 centimetres in diameter and had a circumference of 40 centimetres.

Cold storage: Keeps a month or two, but goes soft and tasteless when stored overlong.

Harvest: The total crop tends to ripen over four to six weeks over the course of the fourth period, possibly into the fifth period. Prone to premature fruit drop.

summary: Highly regarded as a dessert apple in Victorian England.