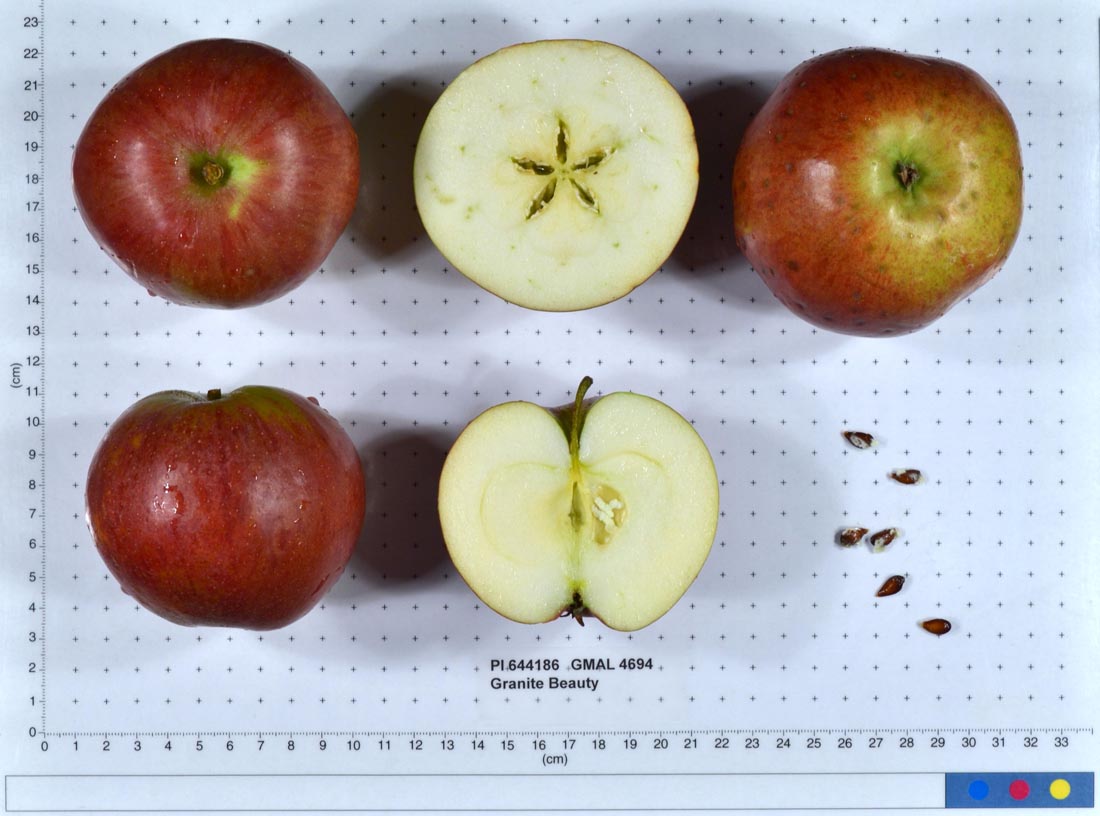 Identification: Very large, round with slightly angular faces. Golden yellow skin is washed with bright red over which are scattered darker red stripes. The surface is peened and the apple becomes waxy at maturity and in storage. The stem is short and slender, set in a deep, narrow, russetted cavity. The calyx is large, closed and set in a ribbed basin. Russet lenticels and sometimes russet webs are scattered on the faces.

Characteristics: The flesh is yellowish, fine-grained and crisp, becoming tender in storage. Juicy with a good sweet-tart balance and flavours of coriander. Aromas and flavours become more intense in storage.

Uses: While the Granite Beauty is a highly regarded eating apple, it also makes a wonderfully flavoured apple sauce. As dried apple rings, it has a distinct nutty taste.

Origins: A chance seedling found along the roadside and planted on the farm of Zephaniah Breed near Weare, New Hampshire (U.S.A.) before 1815. It was originally called the Aunt Dorcas apple, referring to the story that Dorcas Neull had uprooted a wild apple seedling to use as a riding crop and then planted the apple in her garden. Despite its popularity as a market apple, the variety gradually merged into the background and all but disappeared when the original tree died. However, a few additional offshoots were found growing in the vicinity of Weare and these became the focus of a renewed appreciation for the Granite Beauty. There is no record of this wild seedling's parentage.

Cultivation: Trees are cold hardy and bear annually. The onset of cropping is early.

Cold storage: Keeps up to four months in cold storage.

Harvest: Late in the fourth period and into the fifth.