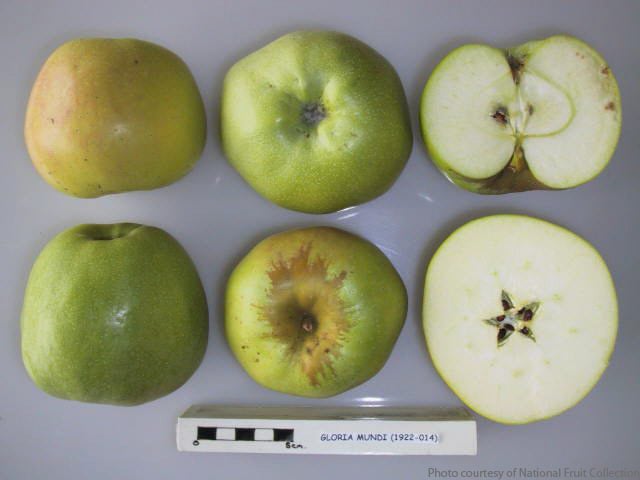 Identification: Very large, round and flattened, higher than it is wide. Irregular shape with defined ribs and five-crowned at the top. Base skin colour is pale green, occasionally flushed pale brown on the sun exposed face. Lenticels are small to medium size with russet centres. The calyx is set in a wide, deep basin which is puckered. The stem is very short and stout, set in a deep, open and russetted cavity with the russet often extending up onto and over the shoulders of the apple. The calyx is small and tightly closed, in a shallow and open basin.

Characteristics: Flesh is creamy white with tinges of green just under the skin. Coarse-grained, soft and dry. Distinctly tart when eaten fresh but becomes quite sweet with cooking. Acidity also diminishes in storage.

Uses: Most people find this apple too tart to eat fresh, but it is delicious and sweet when cooked as an apple sauce or pie.

Origins: Some sources say it may have first been grown before 1800 on the farm of Mr. Crooks of Red Hook, New York (U.S.A.). Other sources say the apple arose on Long Island, New York while other references state that this is the same apple as Baltimore Monstrous Pippin which originated in 1780 in Baltimore, Maryland (U.S.A.). According to the British pomologist Robert Hogg "In British Pomology," (published in 1851), “The general opinion, however, is that it originated in the garden of a Mr. Smith, in the neighbourhood of Baltimore, and was brought over to this country (Britain) by Captain George Hudson, of the ship Belvedere, of Baltimore, in 1817. It was introduced from America into France by Comte Lelieur in 1804. But from the account given in the "Allgemeines Deutsches Gartenmagazin," it is doubtful that it is a native of America, for in the volume of that work for 1805 it is said to have been raised by Herr Kunstgartner Maszman, of Hanover. If that account is correct, its existence in America is, in all probability, owing to its having been taken thither by some Hanoverian emigrants."

Notes: Said to be the largest apple ever grown in North America. One such apple grown in 1860 apparently weighed a staggering 1.6 kilograms, though 700 grams is the norm.

Cold storage: Will store up to two months, but needs to be refrigerated.

Harvest: Ready for harvest in the first half of the fifth period. Skin takes on a greasy feel in storage.