Identification: Small to medium in size and round in shape. Lightly ribbed and some ribbing at the crown. The skin base colour is greenish yellow washed to between 80 and 90% of the surface with a cherry-red blush and profusely marked with whitish lenticels. Occasionally, there is some russetting radiating from the stem basin. The stem is long. A slight bloom is often present at maturity.

Characteristics: The cream coloured flesh firm, crisp and juicy with a sweet-tart flavour that improves with storage. Some tendency to brown after the flesh has been exposed to air.

Uses: Intended as an eating apple.

Origins: Developed at the Summerland Research Station (now called the Pacific Agri-Food Research Centre) in Summerland, British Columbia (Canada) in 1980 by Dr. David A. Lane by crossing Splendour and Gala (Kidd's D8 strain). Four seedlings resulting from the cross -- 8S-26-50, 8S-27-73, 8S-69-23 and 8S-27-51 -- were selected for further testing for first fruit in 1986 through to 1997. Seedling 8S-27-51 was subsequently named Chinook in 1997 by the facility's Dr. Harvey Quamme. The other three cultivars from the programme were set aside for subsequent evaluation and naming.

Cultivation: Moderately vigorous, spreading tree. Bears fruit on spurs. Precocious. It has a tendency to set too heavily, so the flowers must be thinned at fruit set to maintain size. Tolerant to minus 20 degree winter temperatures.

Notes: Not highly favoured by commercial orchard operations due to small fruit and a rather low yield per acre. Russet in and around the cavity occurs some years and this is tagged as another problem for commercial growers. Nevertheless, it seems to do well in farm gate and u-pick operations.

Cold storage: Tend to be starchy when first harvested and tastes best after six weeks in storage; keeps for three months

Harvest: In the first half of the fifth period. 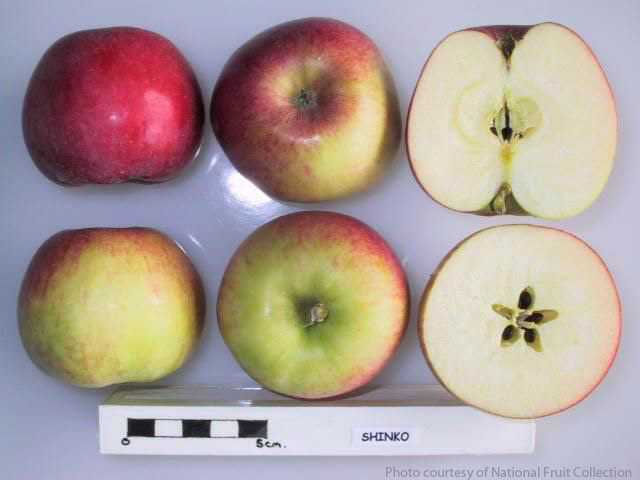 characteristics: The flesh is greenish white, crisp. Juicy and sweet with a honeyed flavour.