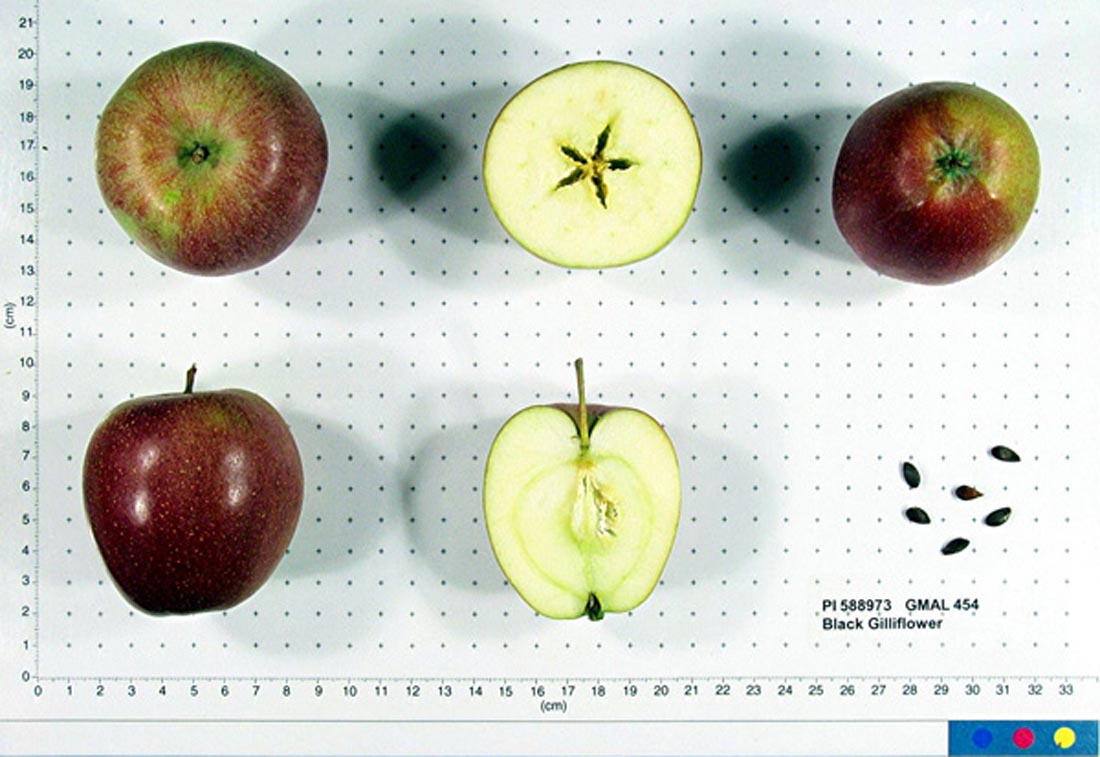 Identification: Medium to large in size, distinctly oblong in shape and mildly ribbed, sometimes lopsided. Distinctive smooth, thick skin. The base colour is greenish maturing to yellowish which is almost completely covered with red wash and broken stripes. Occasionally, the red will be so intense that is appears to be a dark purple, hence the name "Black" Gilliflower. Russetting frequently dots the skin. The stem is medium to long and somewhat stout, set in a wide and deep cavity.

Characteristics: The flesh is pale green white, coarse-grained and firm. Juicy, sweet-sharp and aromatic. Over-ripe apples tend to be dry, but very fragrant and flavourful. Reminiscent of ripe pears. Tends to quickly go dry within a few days after picking.

Uses: Tastes excellent freshly picked, but tends to be on the dry side which detracts from their edibility. Makes excellent desserts, puree and apple sauce. Cooked apples tend to hold their shape well. Also try them sliced and dried.

Origins: Originated in Connecticut in the 1700s. First documented in the 1841 Volume VII issue of "The Magazine of Horticulture" as the Red Gilliflower. Listed in A.J. Downing's 1845 edition of "The Fruit and Fruit Trees of America" also under the synonym Red Gilliflower. In "The Apples of New York" (published 1905), S.A. Beach states "Black Gilliflower is supposed to be an American variety. It was brought into the central and western portions of

Notes: Closely resembles the Northern Crow's Egg . It is thought that the Black Gilliflower might be the mysterious pollen provider for the Hawkeye , which is also known as the original Delicious apple.

Cold storage: Keeps for about a month before becoming dry.

Harvest: Ready for harvest in the middle of the fifth period. Hangs well on the tree even after ripening, but quickly becomes dry.