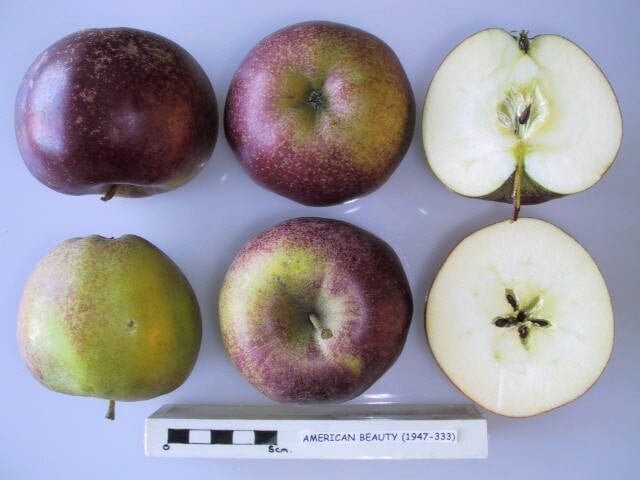 Identification: Large, round to slightly conic. The base colour is yellow over which is a wine-red wash covering two thirds of the surface with mottled pattern on the shaded face. Abundant brownish lenticels give the skin a rough feel. The calyx is small, tight and closed, set in a shallow basin. The stem is short and slender in an open, funnel-shaped cavity which can be russetted.

Characteristics: The flesh is cream-coloured and dense. Somewhat coarse-grained and chewy, sweet and aromatic with a vinous flavour.

Uses: Though primarily a fresh eating apple, the American Beauty is also used for baking and cider.

Origins: The American Beauty was found as a wild seedling in Sterling, Massachusetts (U.S.A.) in the early 1800s. First listed in A.J. Downing's 1857 postmortem issue of "Fruit and Fruit Tress of America" (revision by Charles Downing).

Notes: Originally known as the American Beauty, but the American Pomological Society attempted to change the name to Sterling in 1897 in honour of the town near where it originated. However, it remains best known by its original name.

Harvest: Ready for harvest late in the fourth period and into the early fifth.